The Round Table must rally to save King Arthur. 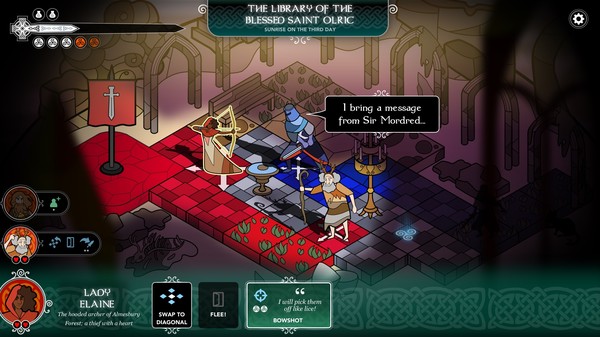 Heaven’s Vault and 80 Days developer Inkl has announced turn-based strategy game Pendragon for PC. It will launch via Steam this summer.

AD 673. Camelot has fallen. The jealous Sir Mordred has broken the fellowship of the Round Table with hatred and lies. Now King Arthur faces his final battle. Who will keep the dream of Camelot alive?

Pendragon is a turn-based strategy game, where every move you make drives the narrative, and every story twist opens new gameplay opportunities.

Will you advance and show your mettle, or cautiously retreat? Will you slip round enemies, or encounter them head-on? And when sacrifices are required, who will you put in harm’s way?

From the creators of the multi-award-winning 80 Days and Heaven’s Vault.

Rally the Knights of the Round Table. Some will make it to Camlann and King Arthur. Others will fall. But every turn will change history.

Will Sir Lancelot be reunited with Queen Guinevere? Will she spurn him, or embrace him? Will Sir Kay ever forgive Sir Gawaine for siding with Sir Mordred? Can Morgana le Fay be trusted? Where is Merlyn? Who lies buried in Mordred’s graveyard? Who is the archer in the woods? What has become of Excalibur?

Secrets will be uncovered. Hearts will be broken. People will die. But maybe, just maybe, King Arthur can be saved…

Powered by the ink engine, the narrative technology behind Heaven’s Vault, Sorcery!, 80 Days, NeoCab, Sable, Where the Water Tastes Like Wine, and many more, Pendragon is a digital storytelling board game of elegance, emotion, and infinite possibility.