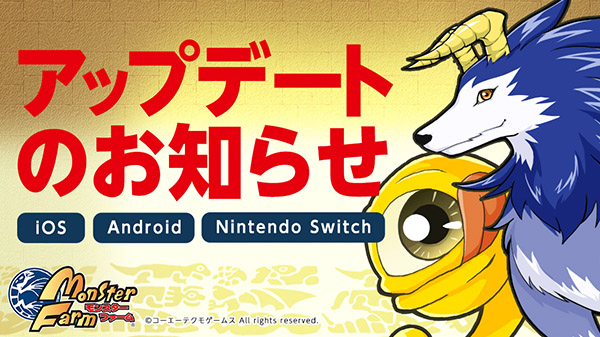 Koei Tecmo has released a free update for Monster Rancher for Switch, iOS, and Android in Japan, which adds new monsters, a player participatory Tournament Mode, and more.

One free manual save slot has been added. In addition to the two free save slots, you can purchase up to 12 additional save slots for 120 yen each, or the full 12-pack for 980 yen.

While you were previously only able to select your own monster, now you can select from monsters uploaded by other players, making battles and tournaments between players easier.

Player participatory tournaments will be held in the future. Players will be able to participate by simply registering a monster that meet the tournament’s conditions, and battles will play out automatically without instruction from breeders.

New monsters derived from existing monster species have been added.

Monster Rancher is available now for Switch via the Nintendo eShop, iOS via the App Store, and Android via Google Play in Japan.

landlock ⋅ Amazon U.K. lists Re:Zero – The Prophecy of the Throne for PS4, Switch ⋅ 4 seconds ago