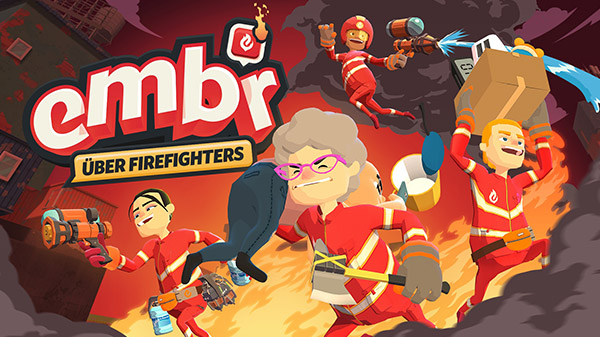 Curve Digital will publish the Muse Games-developed firefighting multiplayer “unsimulator” Embr for PC via Steam Early Access in 2020, the companies announced. The game will be updated with “major content drops” in the months after launch “significantly expanding the game.”

“Embr is set in a hyper-capitalist, deregulated alt-present world where public firefighting funding has run dry, and venture capitalism and e-hailing rule the roost,” said Muse Games team lead Howard Tsao in a press release. “If that all sounds rather loaded—and, indeed, familiar—the gameplay itself is far more upbeat. It’s fair to say our take on firefighting isn’t exactly like for like.”

Taso continued, “Our ‘Embr Respondrs’ might be untrained and unskilled, but they’re a creative bunch, and it’s fair to say their solutions for putting out those domestic blazes are as brilliantly makeshift as they are ridiculously entertaining.”

Curve Digital publishing director Simon Byron added, “It’s fair to say the ‘unsimulator’ genre—where there’s much hilarity to be had in getting things wrong—is one we’ve had our eye on for some time, which made Embr such an interesting prospect. Embr is also a game with a message, however. A stark look at a privatized world where the gig economy is king, and the ramifications that stem from that. It’s a combination we couldn’t resist.”

At a time when our take-out is biked over to us by CEOs trying to bolster their savings in the evenings, and our cabs are driven by anyone with a license and access to four wheels, it makes you wonder whether any of these everyday heroes could turn their talents to some of the bigger jobs.

Do we really need to hit 911/999 when we spot smoke streaming from a building? Yes, yes we do. Just for fun, however, let’s imagine an alternative reality where all such emergencies are handled by the people on the street—where the butcher at the end of the road supplements his wage by driving ambulances in between customers, and the headmistress at your local school fills time between classes performing operations on the backstreets.

From Muse Games, developers of the award-winning Guns of Icarus Online comes the brand new world of Embr—a fantastically fictional take on our world where citizens across the globe have embraced the gig economy to and now stand ready, phones in hand, to respond to your firefighting emergencies.

Working together in an online co-op multiplayer, Embr is a frantic, frenetic, and – most importantly – funny ‘unsimulator’ heading to Steam Early Access in 2020 via Curve Digital, and it promises to mix the spirit and valor of everyday heroism with a delicate dose of satire casting light on the Uber dominated world we live in.

Players will work together to earn tips from clients, earning the ever-so-crucial 5-star rating in order to earn cash, upgrade tools, and become the ultimate “have-a-go hero” firefighter.

Players will work through a variety of missions to earn money and upgrade their firefighting tools and lease better vehicles and fire trucks, all while dealing with competition from the Canadian firefighting startup Hosr. Staying competitive, however, relies on players working together, planning firefighting and rescuing in dense environments with complex systems interactions; water, fire, gas, electricity, and structure integrity all have a role to play.

In Embr, players come together to create unexpected and ingenious solutions…or they can have a lot of fun failing.