Bug Fables: The Everlasting Sapling for PS4, Xbox One, and Switch launches May 28 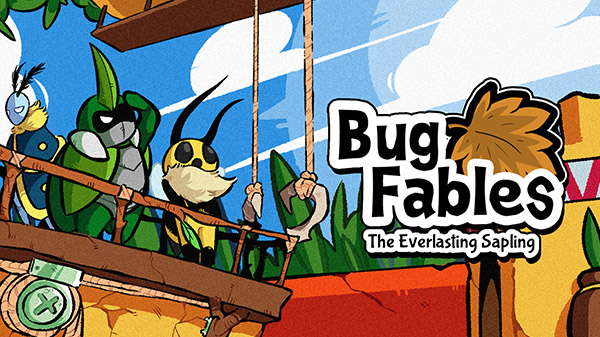 Bug Fables: The Everlasting Sapling will launch for PlayStation 4, Xbox One, and Switch on May 28 for $24.99, publisher Dangen Entertainment and developer Moonsprout Games announced. Xbox One and Switch pre-orders will begin on May 14.

The paper-style adventure RPG first launched for PC via Steam in November 2019.

“I’ve dreamed of seeing my game on consoles my entire life,” said Moonsprout Games lead developer Jose Fernando Gracia in a press release. “I can’t wait to see a new wave of players explore the world of Bug Fables. No matter what console they choose to play it on, I hope Bug Fables gives them a huge smile. To everyone who has supported us until this day, thank you very much! We’ve gotten this far thanks to you!”

Bug Fables: The Everlasting Sapling is an adventure RPG following three heroes, Vi, Kabbu, and Leif, as they embark on an epic quest in Bugaria in search of The Everlasting Sapling, a treasure that can grant immortality! The game combines colorful platforming with the heroes’ unique abilities as they explore a wide variety of areas in the kingdom. The turn-based battles make use of Action Commands that can power up your attacks!

Slice-of-life adventure game A Space for the Unbound coming to PS4, Xbox One, and Switch this winter Previous post
Assassin's Creed Valhalla announced, trailer set for April 30 Next post