Beyond Blue for PS4, Xbox One, and PC launches during the week of June 8 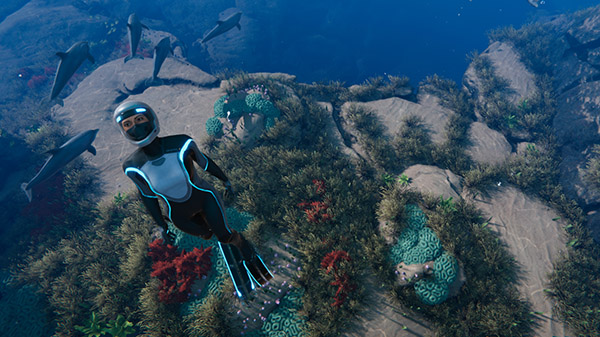 Following an Apple Arcade launch on April 17, single-player narrative adventure game Beyond Blue will launch for PlayStation 4, Xbox One, and PC via Steam during the week of World Oceans Day, which happens on June 8, developer E-Line Media announced. It will cost $19.99.

“We are extremely excited to share Beyond Blue with everyone,” said E-Line Media CEO and Beyond Blue creative director Michael Angst said in a press release. “We have taken care to craft a visual and audio experience that immerses players in the beauty of the ocean and the amazing creatures that inhabit it, while hopefully doing so with some interpretation and artistry.”

Angst continued, “Players will explore diverse environments ranging from a sun-dappled, oasis-like atoll down through the gauzy blue ‘twilight’ zone where only the faintest amount of light reaches to the midnight of the abyssal zone, where rarely seen creatures produce their own light in an environment otherwise devoid of light.”

Here is an overview of the game, via E-Line Media:

Beyond Blue is a single-player narrative adventure that takes you deep into our planet’s beating blue heart.

Set in the near future, Beyond Blue explores the mysteries of our ocean through the eyes of Mirai, a deep-water explorer and scientist. Become a part of a newly-formed research team using groundbreaking technologies to see, hear, and interact with the ocean in a more meaningful way than has ever been attempted.

Wildfire launches May 26 Previous post
The Legend of Heroes: Ao no Kiseki for PS4 web commercial Next post