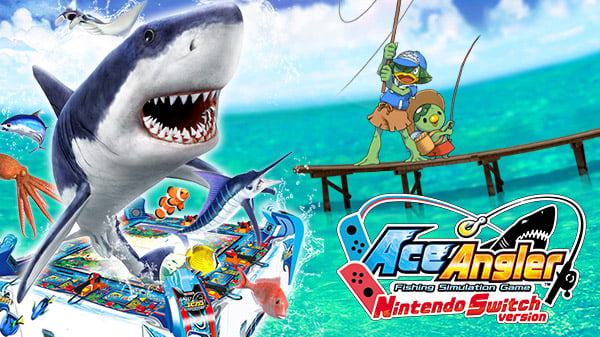 HORI also announced it will release an “Ace Angler Dedicated Joy-Con Attachment for Nintendo Switch” peripheral on July 21 for 2,480 yen in Japan.

Here is an overview of the game, via Bandai Namco Entertainment Southeast Asia:

In the Nintendo Switch version, enjoy the realistic force feedback of casting the line and reeling in the fish with Joy-Con “Rod Technique.” More fun is also added in with responsive HD vibration, where the rod responses when the fish takes the bait as though you’re fishing for real!

Under the supervisor of the Ace Angler team, the “Medal Mode” of the arcade fishing simulation game will be followed closely and implemented into Nintendo Switch to enjoy the fishing experience fully! Furthermore, set sail on a journey with the Kappa brothers in the single-player ‘Adventure Mode’ to capture all the big fishes.

Have fun with your family and friends in “Competition Mode” in which Joy-Cons can be split up and played up to four players! The three modes can be selected accordingly to the meet players’ playstyle and needs! There are also 50 new species added into the game, giving a total of 220 fishes to be caught! Take on the challenge and reel in all the fishes!

Ace Angler is a popular fishing stimulation game in arcades all over the globe.