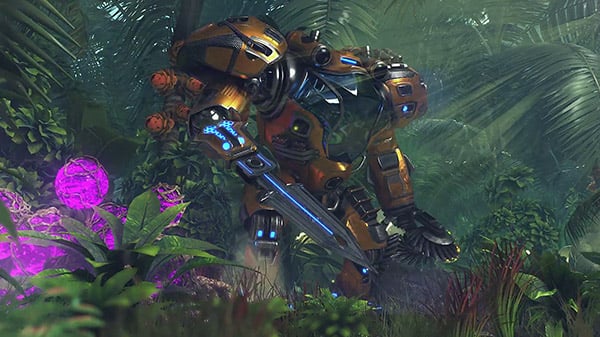 EXOR Studios have released a new gameplay trailer for The Riftbreaker, its upcoming base-building survival game with action RPG elements.

Here is an overview of what you will see in the trailer, via EXOR Studios:

We did our best to show all the important aspects of The Riftbreaker gameplay in this short video. We start off with a segment on exploration of Galatea 37 with new biomes! These are the areas of the planet that we have not visited yet during our streams. They do not only change the visual side of things, but also introduce gameplay changes. Some resources are less common in these areas than in other regions, which will encourage you to adapt your strategy. Unique effects such as environmental damage will also require you to research additional solutions to brave the wilderness of Galatea 37.

Here are short characteristics of the locations you can see in the trailer:

After establishing your base it is time to make sure that all your infrastructure is safe from any outside interference from the native creatures. New variants of enemy units will test your defensive setup time and again. However, there are more defensive options than ever that you can utilize to protect your valuable mines, factories, power plants and other facilities. You can spot some of the new buildings in the trailer, too! Oh, and did we mention new weapons? Yeah, we have them as well! New launchers in several varieties, railguns, plasma guns, a portable nuke—all attachable to Mr. Riggs and ready to wreak havoc.

The trailer also shows you the scale of battles that will take place while you are defending your piece of land on the surface of Galatea 37. The numbers of creatures will go into thousands and there will be plenty of things to take care of… and you will be able to start taking care of them very shortly.

The Riftbreaker is due out for PlayStation 4, Xbox One, and PC via Steam in 2020.