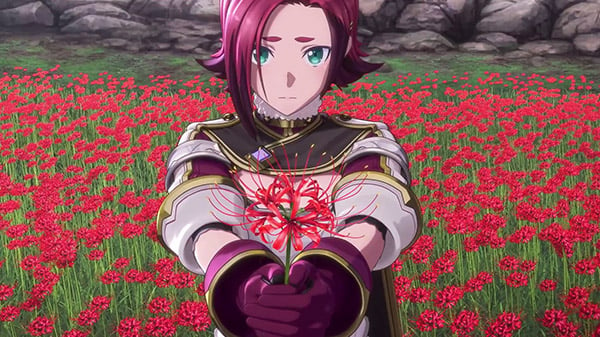 An Integrity Knight that wields the Divine Object “Twin Edged Wings,” a pair of twin-edged throwing knives. As an extraordinarily gifted swordsman, he was recruited to the Integrity Knights at an exceptionally young age, but was unable to use his “Armament Full Control Art.” Because of this, he was marked as a failure and forced into cryostasis for five years.

An Integrity Knight known by the nickname “The Silent” due to her silence and lack of emotion. Even Bercouli Synthesis One fears her as a fierce swordsman. She was given the “Black Lily Sword,” a Divine Object that can cut through anything, by the Administrator.

The resurrection of the Administrator, the highest minister of the Axiom Church…

A man who calls himself Hathilian calls the surprised Medina by the name “Savior,” and says “she alone” has the power to revive the highest minister.

Kirito and company’s words do not reach the girl, who lives to clear the name of the Orthinanos family—.

The Empress who governs the North Empire. A strongly dignified woman, she gives off an overwhelming aura unwelcoming to others. She dotes over a child that she carries in her arms, but she herself has a secret.

A race that fights to survive. And to prove their strength and reason for being. Why do they seek strength? The titans will stand before Kirito and company without any answers.

A knight that wears heavy armor and slowly strides. Is this knight a ghost of the past? Or an invader from the Dark Territory? The knight’s identity is currently a mystery.

There are eight types of Sacred Arts: “Thermal,” “Aerial,” “Aqueous,” “Cryogenic,” “Metallic,” “Crystalline,” “Luminous,” and “Umbral.” Unlike other skills, Sacred Arts can be used without spending SP. As you increase each element’s level, you will unlock higher-class arts.

Thermal arts specialize in long-distance attacks. Some techniques will deal continuous damage to the enemy.

Cryogenic arts specialize in attacking the enemies in front of or in the area around you. There are also techniques that temporarily freeze enemies in their tracks.

Aerial arts also include buff-type techniques. By using a wind barrier, you can protect the entire party from the enemy’s attack.

Metallic arts are buff-type techniques that strengthen the user’s body. They can also be used to generate rocks, creating obstacles for the enemy or footholds for your party.

Umbral arts are debuff-type techniques weakens the enemy or obstructs their actions. Some techniques can inflict the confusion status ailment.

The weapon only used by Renly in the original work and anime. It is exclusive to Renly in the game as well. It specializes in long-distance attacks.

You can also hit the town on dates with your party members, hold each other’s hands, and even carry them around while walking.

Post-launch support for Sword Art Online: Alicization Lycoris will consist of both free and paid content, including:

Daily Quests are new quests that will update everyday.

Quests contents have a range of difficulties, ranging from several minutes to several hours to clear. By clearing daily quests, you can obtain item rewards and CUBE tickets.

CUBEs allow you to obtain various items, including costumes, weapon skins, accessories, consumable items, and emotes. The items that CUBEs contain are random. Items such as costumes and weapon skins do not affect their actual performance.

Items obtained by CUBEs can be obtained by using CUBE tickets, as well as by spending the in-game currency known as SAOCoins.

SAOCoins cannot be used to purchase CUBE tickets—they can only be used to choose and purchase the items that a CUBE would contain.

SAOCoins have been implemented so that users who purchase the game a few months after release, or users who are unable to play everyday can save time.

SAOCoins are in-game currency that can be used to purchase various items. They will be available for purchase in the following packages:

SAOCoins can be spent at the SAOShop to purchase specific items normally obtained by CUBEs.

For users who play everyday, CUBE tickets can be obtained by clearing Daily Quests. The items that a CUBE contains are random.

For users who prefer to save time, items normally obtained by CUBEs can be purchased with SAOCoins, with prices ranging from 400 to 1,000 SAOCoins.

“Ancient Apostle” is a series of free raid quests that will be implemented via updates.

In addition to character scenarios (voice-overs included), new bosses will be added, balance adjustments will be made, and more. The new bosses can be challenged solo offline, or online with other users.

The Premium Pass will include new scenarios, including two parts.

Other new content will also be included with the Premium Pass.

The Deluxe Edition includes Premium Pass pre-loading. More details will be announced at a later date.

Sword Art Online: Alicization Lycoris is due out for PlayStation 4, Xbox One, and PC via Steam on May 21 in Japan, and May 22 in the Americas and Europe.