Set in a utopian afterlife following humanity'e extinction, but not all is as it seems. 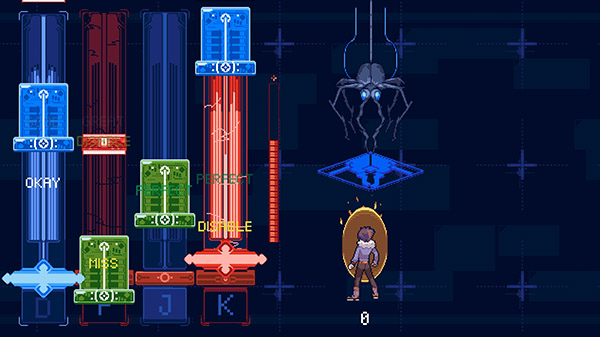 Pracy Studios will release Nocturne: Prelude, the first chapter of story-driven rhythm RPG Nocturne, for PC via Steam as a free download today at 12:00 p.m. PT / 3:00 p.m. ET, the developer announced. The full game is planned for release on Switch and PC in 2023.

“While I began my career in film, I felt this need to create a narrative experience that can only be crafted in a game,” said Pracy Studios founder Benjamin Pracy in a press release. “I’m inspired by the brilliance of late 90s and early 2000s RPGs, where creativity exceeded the bounds of their technical limitations. In Nocturne, I want to take us back to that era, but with a modern twist.”

Here is an overview of the game, via Pracy Studios:

Humanity is extinct, but an echo of civilization lives on. Maya, the fabled utopian afterlife where people abandon their corporeal forms in favor of an eternal existence with loved ones in a digital world, is not all as it seems. Decay and corruption await Karma, the world’s first newcomer in thousands of years, and derails a desperate attempt to reunite with their missing brother on the other side.

Befriend a charmingly quirky crew like a wise orange fish in monk garb and a headstrong little boy to unravel the mysteries of the Blackout, an enigmatic catalyst that triggered Maya’s plunge into chaos. Test the limits of human existence, exposing an insidious threat lurking among the remains of humanity.

March to the beat of battle in Nocturne: Prelude‘s unconventional take on traditional RPG combat through intense rhythm battles with multiple difficulties. Tap to a high energy, progressive symphonic rock soundtrack to keep the battle going, dodging dangerous notes and watching for surprises tucked away in the composition.

Watch the Nocturne: Prelude launch trailer below. View a set of screenshots at the gallery.

Arnold ⋅ Kena: Bridge of Spirits delayed to September 21 ⋅ 8 minutes ago