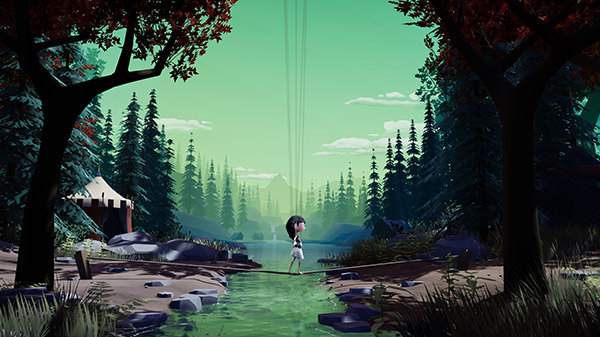 When asked to clarify if PlayStation and Xbox meant PlayStation 4 and Xbox One or PlayStation 5 and Xbox Series X, a Mixtvision Games representative told Gematsu, “We’d definitely love to see the game on the next-gen consoles, but at the moment can’t 100 percent guarantee it, which is why we kept the platforms a bit more vague for now.”

In a press release, Mixtvision Games director of games publishing Benjamin Feld said, “We are extremely happy to be able to add another high-quality and meaningful title like A Juggler’s Tale to our portfolio, and we look forward to working closely with the team of Kaleidoscube. We believe the game has what it takes to become another indie hit.”

Kaleidoscube managing director Dominik Schon added, “For us as a student-founded startup, working with a publisher like Mixtvision on our game is a dream come true. Their way of thinking about storydriven games fits perfectly with our vision and we really look forward to the upcoming months.”

Here is an overview of the game, via Mixtvision:

The hope-inspiring 3D side scrolling adventure puts players in the shoes of Abby the string puppet, a talented artiste held captive at a circus. Longing for freedom, Abby flees from captivity, but soon has to realize that her fate isn’t completely in her own hands. Will she be able to take control of her destiny and make a difference with all the strings attached?

The game brings unique mechanics to the table: Set in a marionette theater, the acting characters are literally attached to the puppet master and narrator named Jack. Their bond is visible and tangible in the shape of strings: These strings prevent characters from walking beneath obstacles, for example, but they also offer a kind of safety: falling into a gaping abyss while hanging on strings is equally impossible. A Juggler’s Tale explores the string puppets’ relationship to the narrator, while making clever use of the underlying puppet play principles in its puzzles.

A Juggler’s Tale‘s world of grim beauty already attracted favorable attention at events like Gamescom or AdventureX and received numerous awards like the Game Connection Europe “Grand Award” 2019 and the German Computer Game Award “Best Newcomer Prototype” 2019. The game by German studio Kaleidoscube is one of the finalists at the 2020 Independent Games Festival awards for Best Student Game.