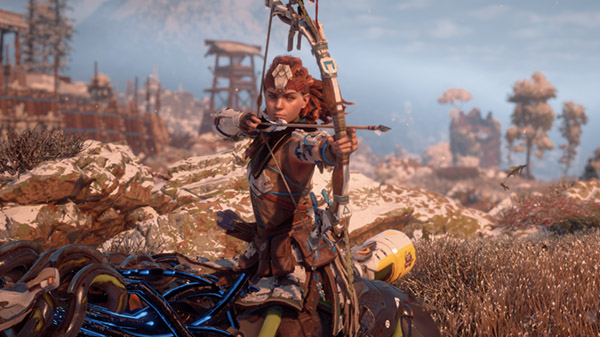 “I can confirm that Horizon Zero Dawn is coming to PC this summer,” Hulst said. “There will be more information coming from Guerrilla, from the new studio directors [Michiel van der Leeuw, JB van Beek, and Angie Smets] pretty soon.”

Horizon Zero Dawn is an open-world RPG developed by Sony Interactive Entertainment studio Guerrilla Games. The original version launched for PlayStation 4 in February 2017, followed by the Complete Edition in December 2017.

Earth is ours no more.

Experience Aloy’s entire legendary quest to unravel the mysteries of a world ruled by deadly Machines.

An outcast from her tribe, the young hunter fights to uncover her past, discover her destiny… and stop a catastrophic threat to the future.

Unleash devastating, tactical attacks against unique Machines and rival tribes as you explore an open wold teeming with wildlife and danger.

On the topic of future PC ports, Hulst commented, “I think it’s important that we stay open to new ideas of how to introduce more people to PlayStation, and show people maybe what they’ve been missing out on. And to maybe put a few minds at ease, releasing one first-party AAA title to PC doesn’t necessarily mean that every game now will come to PC. In my mind, Horizon Zero Dawn was just a great fit in this particular instance. We don’t have plans for day and date [PC releases], and we remain 100 percent committed to dedicated hardware.”

Speaking of hardware, PlayStation 5 is due out this holiday season. Hulst also teased, “You know, these are the most exciting times when you develop on a console. We are super hard at work at the moment… and honestly, I can’t wait to talk to you in more detail about that.”

He later added, “We’re very committed to dedicated hardware, as we were before. We’re gonna continue to do that. And we’re very committed to quality exclusives. And to strong narrative-driven, single-player games. At the same time, we’re going to be very open to experimentation, to new ideas. Just trying things out to see what works. I think that’s also very much part of the DNA of Worldwide Studios.”