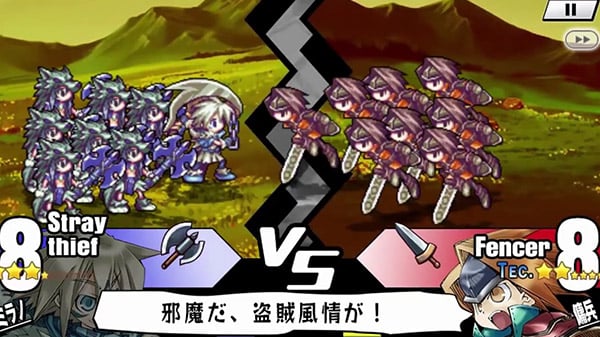 Sting will release Yggdra Union: We’ll Never Fight Alone for Switch via the Nintendo eShop in Japan on March 5 for 1,800 yen, the latest issue of Weekly Famitsu reveals.

Yggdra Union: We’ll Never Fight Alone first launched for Game Boy Advance in 2006. A PSP version was released in 2008. Both versions were localized in the west by Atlus U.S.A. iOS and Android versions were released in April 2019 in Japan.

Here is an overview of the game’s story and key features, via its English PSP release:

Strike at the enemy with more than menus when card-based tactical combat meets real-time action. Victory depends upon building your strongest deck, monitoring your aggression meter, and exploiting unions in battle as Princess Yggdra and her troops fight to liberate her kingdom!

The Kingdom of Fantasinia, located in the center of the continental world.

Time of peace and prosperity continued for many years under the Holy Sword and a wise king, but this was not meant to last forever…

The end came so suddenly…

During the rule of Ordene, 31st monarch of Fantasinia, the New Bronquian Empire invaded.

The Royal Army mustered its cavalry to resist the incursion, but with loss after loss to the Imperial Army’s devastating offensive, the fortress of Karona fell.

Nothing could stop Bronquia from sacking the Royal Capital of Paltina.

Gulcasa, the Emperor of Carnage, has deposed his predecessor by force and became the new emperor of Bronquia.

Emperor Gulcasa personally led his elite troops into Castle Paltina, where after an earthshaking battle, he slew King Ordene.

With that, Paltina fell, and the scarlet Imperial flag was raised to flutter in the twilight sky…

During the turmoil, there was a single girl that was able to escape from the fallen Paltina.

She was young and innocent-looking, but in her hands, she clutched a sword: the Holy Sword “Gran Centurio” that is passed from monarch to monarch, through the generations of Fantasinian rulers…

This was the legendary sword said to have been used by the great hero who first established the kingdom and cultivated the land.

With the kingdom’s last hope in her hands, she finally reaches the southernmost region of the continent.

There she meets the bandit king Milanor, and with him, the battle to liberate Yggdra’s homeland unfolds…