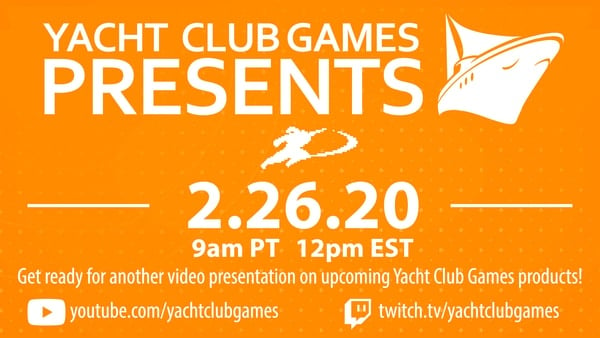 Yacht Club Games will host its second official “Yacht Club Games Presents” video presentation on February 26 at 9:00 a.m. PT / 12:00 p.m. ET, the company announced. You will be able to watch it on YouTube and Twitch.

“We had a blast with the first Yacht Club Games Presents, so we’re doing it again!” said Yacht Club Games designer Sean Velasco in a press release. “This format allows us to share what’s new at the studio in a more personable way than a press release. Besides updates on our in-development projects, we also have some big surprises in store, so get your excited hats on.”

Daniel Guerrero ⋅ The Legend of Heroes: Trails of Cold Steel IV coming west for PS4 this fall, Switch and PC in 2021 ⋅ 4 minutes ago
Latest Open Forum