Developed with "partial support" of Suda 51. 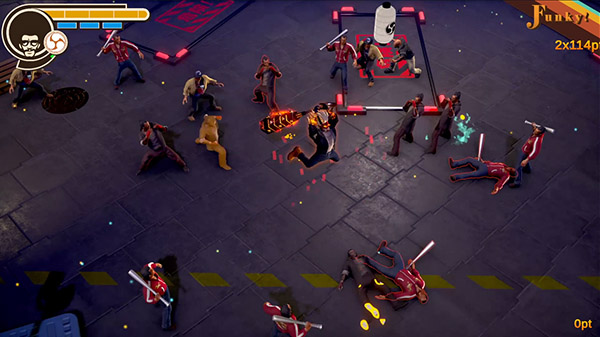 Cowboy Yakuza was developed with “partial support” from Grasshopper Manufacture CEO Goichi “Suda 51” Suda, “whose universally acclaimed sense of world-building and unmatched flair for storytelling provided much inspiration in this game’s development.”

Here is an overview of the game, via Active Gaming Media:

Cowboy Yakuza is the story of Texas-born Cleveland (“Cleve”) Waingro and his adventures through late-80s in Japan. In the more downtrodden neighborhoods of Osaka, largely unaffected by the Japanese economic bubble of the 1980s, Cleve had been leading a peaceful, quiet life—almost as if he had been hiding from something…

It wasn’t long before the local Yakuza, after witnessing Cleve’s impressive physical prowess and innate ability to handle himself in a fight, decided they wanted to harness this powerhouse from the West for themselves and forcefully recruited him into their own ranks.

Now, Cleve must make some crucial and life-altering decisions: Are these Japanese gangsters friends or foes? Which will he trust – his sense of duty, or his own humanity? Which will he choose – love, or friendship?
Caught up in the chaotic web of intrigue, violence, and crime that now pervaded every aspect of his newfound life, and left with no way to turn back, Cleve set off down a dangerous and blood-soaked path…

Development of Cowboy Yakuza has entered its final stages, and the majority of the game has been completed. However, Active Gaming Media made the decision to release the game to Steam Early Access in hopes of collecting invaluable user feedback on gameplay, storylines, and game balance directly from the players.

We welcome any inquiries from potential publishing partners as well.