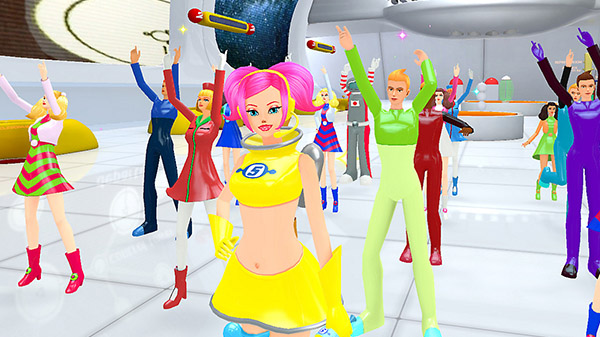 According to Grounding Inc., “the idols of the past and future will meet in additional downloadable game content, where players can dance with both Ulala and Hatsune Miku.” More information will be announced at a later date.

Space Channel 5 VR: Kinda Funky News Flash! is available today for PlayStation VR today in the Americas and will launch on February 26 in Europe, Japan, and Oceania. HTC Vive, SteamVR, and Oculus Quest versions are also planned for release at a later date.

Here is a brief overview of the game, via Grounding Inc.:

Space Channel 5 VR: Kinda Funky News Flash! is the first standalone game from Sega’s music and dance-themed masterpiece franchise to be released in 17 years, which also celebrated its 20 year anniversary on December 16, 2019. Members of the original development team have returned to usher Space Channel 5 into a new decade.

The English voice cast includes Cherami Leigh taking over the lead role as Ulala, and Tom Clarke-Hill returning to reprise his role as Jaguar. Other cast members include Cassandra Lee Morris as newcomer Kell and Greg Chun as the being terrorizing the galaxy, Glitter.

Rise Kujikawa ⋅ Princess Connect! Re: Dive now available in the west ⋅ 2 minutes ago

LordTerrantos ⋅ Nioh director: No current plans for Nioh 3, but hopes to return to series in the future; Ninja Gaiden news coming soon ⋅ 8 minutes ago

Overdone ⋅ The Medium ‘What Does a Medium Do?’ trailer ⋅ 15 minutes ago
Latest Open Forum