Explore a dark temple made of endless rooms and corridors. 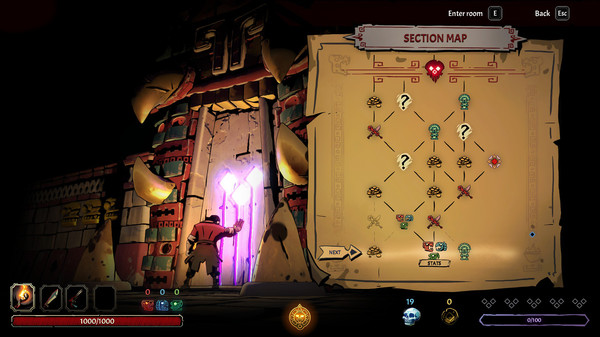 “At the start of Eearly Access, players will have access to what can be considered as about a third of the final content in production,” said Passtech Games CEO Sylvain Passot in a press release. “However, since each game is different with a large share of randomness, there is a lot to discover in this first segment. Curse of the Dead Gods is a modular game with great replayability, and we believe that early access will make the most of it!”

Early access will begin a new roadmap of frequent updates with “rich content and improvements based on community feedback,” including new temples to explore, each with their own “unique look, traps, and enemies,” as well as new game modes, mechanics, weapons, curses, and relics.

Curse of the Dead Gods will also be playable at PAX East 2020, which runs from February 27 to March 1 at the Boston Convention Center.

Your greed will lead you to death, but that is not an escape. Rise to fight again. Delve deeper again. Defy the malignant deities that linger in this place. Battle through hordes of enemies in dark, cavernous passages filled with traps and secrets of all sorts—fire-spewing statues, explosives, hidden spikes, and worse.

Collect mystical Relics and an arsenal of weapons to make yourself unstoppable. Corruption builds in you with every step—encourage or ignore it, but each powerful curse can be a double-edged sword.