Take on the Imperial Army and rescue your King from captivity. 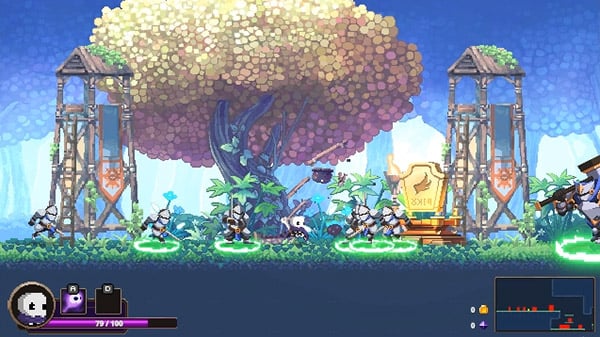 Rogue-lite 2D platformer Skul: The Hero Slayer will launch for PC via Steam Early Access on February 19, publisher Neowiz and developer SouthPAW Games announced. It will support English, Japanese, Korean, Simplified Chinese, and German language options, with additional languages to be available at full release. PlayStation 4, Xbox One, and Switch versions are planned for release later this year.

“Skul is no ordinary skeleton, and we can’t wait to share him with the world,” said SouthPAW Games CEO Sang Woo Park in a press release. “We’ll be actively collaborating with our community throughout Early Access to utilize their valued feedback as we reveal new content including new levels and bosses, additional playable characters, and more.”

The Demon King’s Castle in Ruins

The human race attacking the Demon King’s castle is nothing new and has happened countless times before. What makes this time different though, is that the Adventurers decided to join forces with the Imperial Army and the “Hero of Caerleon” to lead a full onslaught in hopes of wiping out the Demons once and for all. They attacked the Demon stronghold with overwhelming numbers and succeeded in its total destruction. All of the demons in the castle were taken prisoner except for one lone skeleton named Skul.