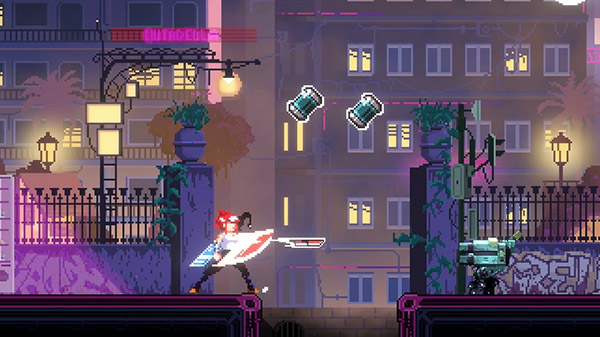 2Awesome Studio has announced Aeon Drive, an action platformer sequel to shoot ’em up game Dimension Drive. It will launch for consoles and PC this summer, and a free alpha version will be available through the 2Awesome Studio Discord soon.

Aeon Drive is an action platformer game set in a cyberpunk version of Barcelona. The player controls Jack, a stranded space pilot on a quest to retrieve faulty pieces of dimension-bending machinery in order to preserve the space-time fabric of the universe. Jack will have to overcome a myriad obstacles using her sword, her teleportation dagger, and her unique skill to control time.

Aeon Drive is set in the same universe as Dimension Drive and continues the exploits of its hero, interstellar pilot Jackelyne, but the gameplay is radically different. This time Jack will leave her spaceship behind to explore a twisted, cyberpunk version of funky Barcelona to face her worst enemy—time. Jack will jump, slash, teleport and warp time in her tense race against the clock.

Teleport your way through time itself! Instead of using the usual try/die/repeat loop of most videogames, Aeon Drive features a unique time-warping system that saves players the frustration of repetition and keeps the challenge fresh. Is this level too hard? No problem, just recharge your timer before you run out of time and get those few seconds you need to beat the level. Run out of time-warping crystals and you will be on your own. Obstacles, enemies, and falls are your worst enemy, as time is always slipping away…