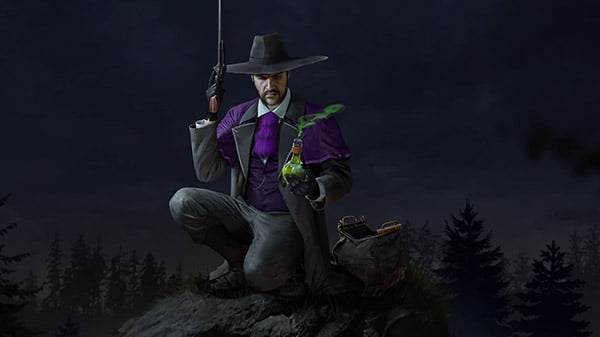 Desperados III will launch for PlayStation 4, Xbox One, and PC this summer, publisher THQ Nordic and developer Mimimi Productions announced.

Here is an overview of the character, via THQ Nordic:

Need a gun for hire? Ask for Doc McCoy, a ruthless sharpshooter and veteran field medic, he’ll get the job done. With his custom made Colt Buntline Special, he can shoot the wings off a fly—or an opponent from far away. He also can give an enemy special treatment with his syringe…

McCoy spent his younger years studying medicine in England. When he finished his studies, he was looking for an adventure and oh boy, he found one. He set sail to the new world, crossed the Atlantic, and set foot on the American shore. There, he was forcibly recruited to fight in the American Civil War. He fought and worked as a doctor alike, but could not stand the horror and the futility of the war, so he deserted after a year of service and became a gun for hire. Nowadays he’s known in certain circles as someone who gets the job done and doesn’t ask too many questions.

Desperados III is a story driven hardcore tactical stealth game set in a ruthless Wild West scenario. In this long awaited prequel to the beloved classic Desperados: Wanted Dead or Alive you experience the origin story of the infamous John Cooper and his gang. Combine your specialists to overcome tough challenges in many different ways. Plan your moves wisely and execute them perfectly in real time to sneak past your enemies while remaining undetected.

Deliver Us The Moon launches April 24 for PS4 and Xbox One, this summer for Switch Previous post
No Man’s Sky 'Living Ship' update now available Next post