First look at the re-imagining of the 2004-released classic. 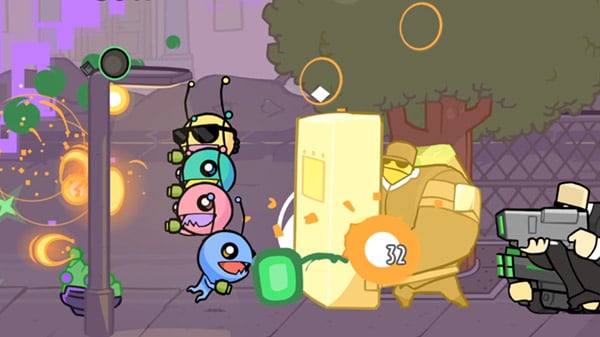 The Behemoth has released the first gameplay videos of Alien Hominid Invasion, as well as confirmed the cooperative run ‘n’ gun re-imagination of the original Alien Hominid is planned for release on Xbox One, Switch, and PC via Steam.

“Alien Hominid Invasion is a whole new approach to our flagship title from 16 years ago, using everything we’ve learned along the way!” said The Behemoth co-founder Dan Paladin in a press release. “While the game will be familiar in some ways, it is very new and different in others.”

Here is an overview of the game, via The Behemoth:

Alien Hominid Invasion is a co-op run ‘n’ gun packed with chaos, mayhem, and a whole lot of explosions. Unlock and equip an arsenal of weapons and boosts, level up, then beam down to invade Earth with up to three other friends. Abduct intel from your enemies to sabotage their plans, observe the oddities of human life, blow up bosses, and mutate into a variety of powerful Alien forms in order to take down the not-so-secret Agents that are dead set on ruining your day.