The noble thief and the highborn captain. 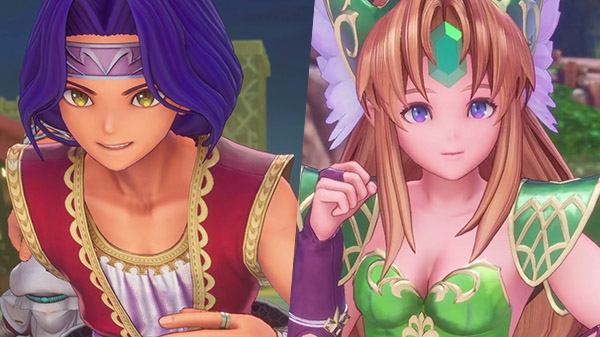 Square Enix has released the final in its series of three trailers spotlighting the main characters of Trials of Mana. This one focuses on Hawkeye, noble thief of the Nevarland thief guild, and Riesz, highborn captain of Laurent’s Amazon Guard.

Hawkeye is a quick-witted rogue from the fortress of Nevari. Although in the desert, it’s far from deserted and acts as the home to a guild of noble thieves, led by Hawkeye’s adoptive father Flamekahn.

The guild leader took the orphaned Hawkeye in at an early age, and our raised him alongside his own children Eagle and Jessica.

Hawkeye has grown into a smart and skilled young man who is fiercely loyal to his friends… though his somewhat laid-back attitude can make it difficult for them to know when he’s being serious.

Riesz is a young princess from the mountainous kingdom of Laurent. Despite her young age, she’s already one of the fiercest fighters in the region and captain of the famous Amazon Guard to boot!

Her intense commitment to her kingdom is only superseded by her love for her family—particularly her brother Elliot, who she’s helped raise since her mother passed away.

Her unbreakable will and down-to-earth attitude mean that some could perceive Riesz as stubborn—but that’s not the case. She’s a compassionate warrior who will jump into action to help those in need without hesitation.

Although these brave heroes are very different people, their worlds are about to collide. When Hawkeye’s father starts acting oddly, and unexpectedly launches an invasion of Laurent, both characters’ lives are changed forever.

Trials of Mana is due out worldwide for PlayStation 4, Switch, and PC via Steam worldwide on April 24. Read more about the game here.