A game about an android struggling to infiltrate human society. 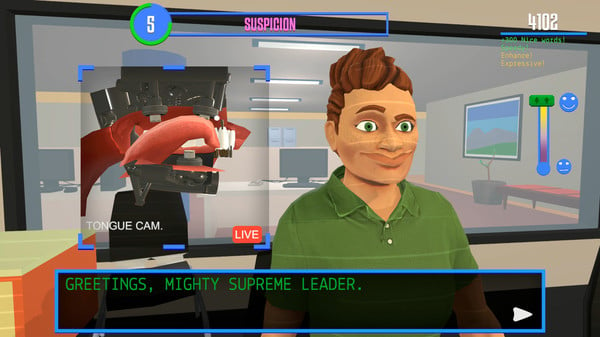 Speaking Simulator, a game about an android struggling to infiltrate human society, will launch for Switch via the Nintendo eShop and PC and Mac via Steam on January 30, developer Affable Games announced. The Switch version is newly announced. The game will support English, French, Italian, German, Spanish, and Traditional and Simplified Chinese language options.

This game is about being a regular normal human.

Infiltrate a world of extremely trusting humans, speak to them, and convince them that you’re definitely not a robot.

You will move your meat mouth in certain ways to make words come out. Somehow, just by waving a wet tongue around and stretching your lips a bit speech happens.

Nobody knows how this works but in this simulation you will have to learn quickly if you don’t want your face to explode.

Unfortunately, there were some corners cut on your safety features. If you make errors your systems will overload and your AI will be forced to relieve pressure by triggering one of the various array of facial explosions and mechanical glitches.

As you upgrade your social mechanics, you will have to learn to smile when something is happy and frown when something is sad. There is also the eye contact upgrade, as humans find it suspicious if you look unceasingly into their eyes with a wide smile as they tell you a tragic story.