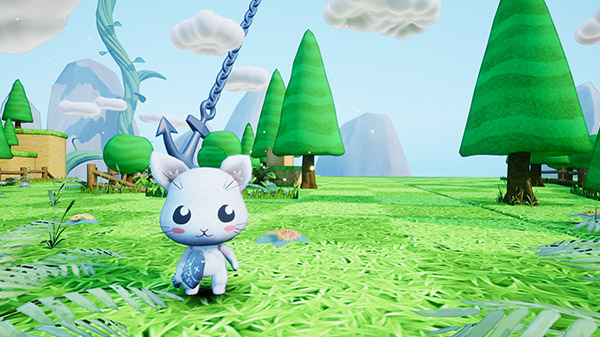 “Neko Ghost, Jump! was originally conceived as a prototype during an Unreal Engine game jam, and after five days it was clear that we were onto something special,” said Burgos Games founder Victor Burgos in a press release. “So I kept at it, hired a handful of contributors, and it’s finally turned into something more ambitious than I ever imagined. I can’t wait to share it with the rest of you later this year!”

Here is an overview of the game, via Burgos Games:

Neko Ghost, Jump! is a puzzle platformer that tasks players with switching between 2D and 3D planes as they guide Nekoman on an epic quest to rescue his kidnapped friends and family from the dastardly Space Pirate Dog Boss and his minions. This odyssey will take Nekoman across several biomes ranging from grassy plains, to snowy tundras, to sweltering deserts and beyond. Along the way you’ll have to not only switch between 2D and 3D planes, but also to your spirit form to take out any baddies along the way as you guide Nekoman through a series of entertaining yet challenging obstacles!

Neko Ghost, Jump! will run the gamut from an accessible family friendly affair to a devious challenge for more masochistic players. Each stage will rank you on speed, while collecting coins will cut some time off your counter. Blast through each level to ascend the leaderboards and prove your worth as the fastest feline on the prowl! Shedding seconds of the clock isn’t all coins are good for, as you can also use them to customize your Nekoman’s appearance. Give him sweet specs, a dapper hat, or some shiny bling. It’s up to you hepcats!

ElusiveImperfectButterfly ⋅ Samurai Warriors 5 launches June 24 in Japan, July 27 in the west ⋅ 14 seconds ago