Plus comments from the composers. 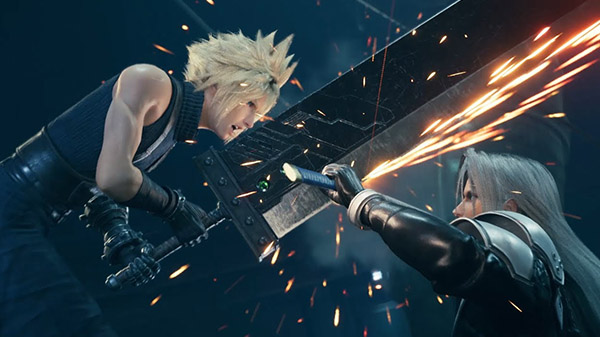 The trailer also delves further into the adventures of characters Cloud, Tifa, Aerith, and Barret in the city of Midgar. It features the first official appearances of Red XIII, cross-dressing Cloud, Wall Market in the Midgar Slums, and more.

Here are a set of comments from the composers:

Whichever game you pick from the Final Fantasy series, they all have many powerful memories for me. However, if you limit things to just the music, then you could say that VII left the biggest impression on me in the sense that it represents the point at which I was able to start challenging the boundaries and being more experimental.

Nobody has seen music like this in the Final Fantasy series before, whether you look at the symphonic “Opening – Bombing Mission”, the numerous different vistas evoked within a single track in “Main Theme of Final Fantasy VII” or “One-Winged Angel,” that was made by arranging different sequences of phrases every few bars.

I think that perhaps it was the perfect time to take on these new challenges, what with changing platforms after the previous game, Final Fantasy VI, and with the expressive power of the hardware increasing dramatically.

However, looking back in hindsight, I think that it was not simply a case of the hardware evolving, but that the changing times also demanded a revolution in game music. That was the moment when video games, a medium that started out as a plaything for children, were making the transformation into a form of entertainment that adults could enjoy too. But even though things were changing around us, we had no idea what to do or which direction we should be heading in.

Nobody could have possibly known what the right answers were back then. I just sat alone in my room each day and wordlessly took on musical challenge after new musical challenge, setting no final goal for the finished game, and without even listening to the opinions of others. And the result of that was the soundtrack to Final Fantasy VII.

This time round I was given the honor of writing “Hollow” that plays during the game, and this track is also in a style that has never been seen in Final Fantasy before. To me, it is very much a continuation of my experimental challenges in the field of music.

The first Final Fantasy game that I worked on at Square Enix was Final Fantasy VII. I sorted out the chorus and actually sung in it myself, as well as putting in the short extracts from Haydn ‘s “The Creation” that play during the story and directing the singing on them.

This time round I got to work with many of the original team again, such as Mr. Kitase, Mr. Toriyama, and Mr. Uematsu, and it really feels like time has started to flow backwards!

On the surface we are working together as developers now, but for me, these were the people who were my inscrutable seniors in the company and who checked and approved my pay.

After many moons have passed and I announced my resignation, I still sent them letters and they were a source of inspiration to me simply by being who they are. I never spoke to any of them outside of a work context, but those things stick strongly in your memory over such long development periods.

When Mr. Kitase and Mr. Toriyama contacted me about Final Fantasy VII Remake, and with Mr. Uematsu even recommending me for the job, there was no way I could turn it down!

I was exhausted and even felt that I had enough of making games, possibly because of my increasing age and feeling very limited by the new system, but in the end I think it was those feelings that let me push myself back.

It is the same every time, but I feel that I have managed to somehow write music that very much has the “Final” ethos of Final Fantasy behind it.

“Would you like to create this scene from the music up?”

This very happy question was how I was asked to join the Final Fantasy VII Remake development team.

Time has passed since then and it is now 10 years since I became involved in games. Working on the Final Fantasy VII Remake feels very strange, but at the same time it also brings back vivid memories of the sounds, surprises and emotions I experienced at the time.

It did not take long for me to come together with the original project staff and grasp my position on the team. My role here was to work on the new elements that a remake allows and breathe new life into it.

I have created a huge number of tracks and put great care into how they are presented, in order to create something that will delight both people who played the original game and those who are experiencing it for the first time with the remake. I strove to always put a sense of playfulness into the music, not just for the new pieces but also with new arrangements and samplings of older tracks that respect the originals and full re-makes of some of them.

Working on places like Wall Market, the Honeybee Inn and Midgar Highway was one thrill after another! I brought back the surprise and enjoyment that I felt as a consumer of the original game, but the biggest change this time round is that I am now on the side providing those experiences.

Myself and the large sound team came together to remake the sound of this world. There is a lot to look forward to and not long to wait now!

In related news, Square Enix announced the Final Fantasy VII Remake Orchestra World Tour, which will take place in over 10 cities around the world, starting in Los Angeles, this June. The concerts will feature music from the game’s soundtrack, including “Hollow,” performed by a full orchestra and chorus, conducted by Grammy Award winner Arnie Roth. Visit the official website for ticket information.

Watch the trailer and a behind the scenes video below.

Theme Song Behind the Scenes Video

deerox ⋅ Laid-Back Camp: Have a nice day! launches for PS4, Switch this fall in Japan ⋅ one minute ago