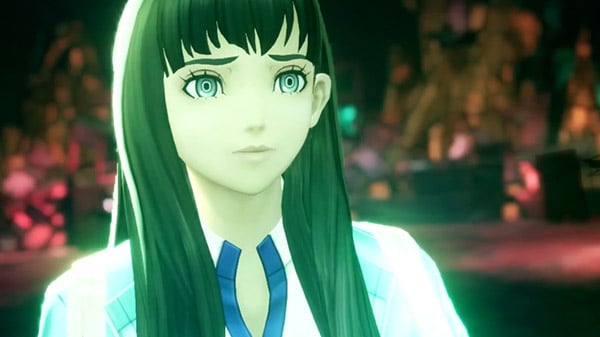 Here is the full English transcript:

Have you had a chance to catch the latest trailer released last week? For this first segment, we’d like to introduce the new characters who made an appearance.

The protagonist obtains newfound, supernatural powers after wandering into Da’at. Upon safely returning to Tokyo, he joins Bethel, an elite organization devoted to fighting demons, and swears to protect Tokyo, along with his classmates.

However, a band of demons suddenly attacks their academy. Will the protagonist and his friends be able to protect other students? And what is the motive behind the legendary demon that awakens in Da’at, the “other” Tokyo?

You just watched the introduction of the new characters. It’s exciting to imagine what story will ultimately unfold from this cast.

Next, we will introduce new battle features. Let’s take a look.

During Press Turn Battles, your actions will gradually fill up the Magatsuhi Gauge. Once full, you can activate special moves called Magatsuhi Skills. These can unleash powerful attacks dealing massive damage, as well as various support and healing skills. However, enemies can utilize these too, so beware. By strategically using these skills to your advantage, you’re sure to enjoy an even wider range of tactical gameplay.

You just watched the latest battle feature: Magatsuhi Skills. It seems we may be able to enjoy a Press Turn Battle system that has evolved even further.

PSA: We are always accepting messages from our viewers. We’ve been highlighting a few of them below. For this next segment, I’d like to read one out loud. We received the following message from @Mixbus:

“Congratulations on the upcoming launch of the game. I had a question, but will there be downloadable content maps to earn Macca and EXP, like there was for Shin Megami Tensei III: Nocturne HD Remaster?”

Yes, I’m happy to say that we do plan on preparing these. Please stay tuned for additional info.

Tweet your questions with the hashtag #AskSMT5. Please also continue to send along your messages and questions. We look forward to hearing from you.

That concludes our related announcements.

It is now time to say farewell.

All the information we shared today will be updated on our official website. Please be sure to check it out, along with our latest trailer.

Here at Shin Megami Tensei V News, we plan to periodically deliver the latest information about the game. The next program is scheduled for late-August. We will see you again then.

Shin Megami Tensei V is due out for Switch on November 11 in Japan and November 12 worldwide. Read more about the game here. Watch the latest trailer here.

Watch the full program below.