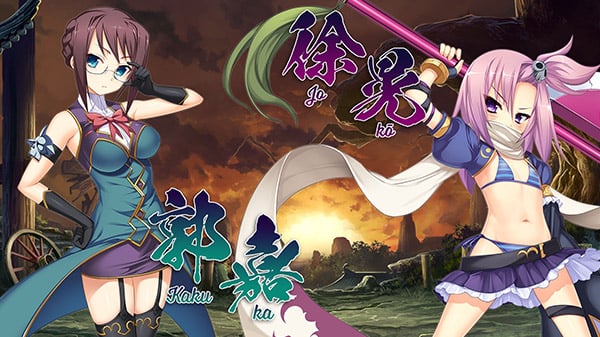 The additional characters first launched for the PC (Steam) version on April 22.

Here is an overview of the Joko and Kakuka pack, via PlayStation Store:

You will be able to use the new playable character Joko Komei and a new support character  Kakuka Hoko in Koihime Enbu RyoRaiRai after purchasing this downloadable content.

She’s an introvert who does not talk much and works quietly without showing much emotion. She’s small in stature but wields a large axe with ease that is out of proportion to her size. She is one of the bravest in the Wei military forces.

She is serious and sometimes gives her opinions to Cao Cao, but her stubborn attitude is the reverse of her true feelings. Whenever she gets distracted, she has a habit of bursting into a nosebleed because of her delusion of being bullied by Soso. She uses the “Supersonic Impact,” which blasts away approaching enemies.

Additionally, a free update has been released implementing the following changes:

Koihime Enbu RyoRaiRai is available now for PlayStation 4 and PC via Steam.