AWAY: The Survival Series adds PS5 version, launches this summer 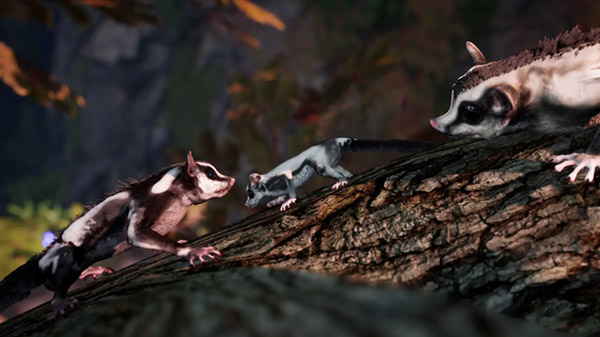 AWAY: The Survival Series will launch for PlayStation 5 alongside its previously confirmed PlayStation 4, Xbox One, and PC (Steam) versions later this summer, developer Breaking Walls announced.

The developer also announced that Perp Games will publish a physical edition of AWAY: The Survival Series for PlayStation 5 and PlayStation 4, which includes a copy of the soundtrack and an augmented reality scene that plays out on the game’s box.

Here are the latest details, via PlayStation Blog:

Nature is Your Obstacle Course

Do as the sugar gliders do! You’ll be able to explore on ground and by air. Glide your way through lush forests as you thread between branches. Don’t forget to dodge and barrel roll to avoid trouble!

As you navigate this living, breathing world, your adventures will be narrated just like your favorite nature documentaries. Our team spent a lot of time researching various flora and fauna to ensure all the information shared by our narrator is accurate—learn about the plants and animals inhabiting each strange new ecosystem as you explore their diverse terrain.

Our narrative team consisted of our voice-over actor, Andrew Robinson, and our scriptwriter, Cecily Walter. Cecily did a wonderful job perfecting the tone of our narrator—who himself is a key player in AWAY‘s overarching story—and Andrew brought him to life with his natural instinct for voicing nature documentaries.

We are excited to officially announce that AWAY will include Photo Mode! Freeze the sugar glider anywhere and move the camera while the rest of the world continues in ambient motion.

Photography fans are sure to be pleased with a comprehensive settings including depth-of-field sliders and filters to ensure you get that perfect shot.

Play as Other Animals, Including a Praying Mantis

As you navigate the world, you’ll encounter many creatures; some friendly, others…not so much! In AWAY, you’ll get the chance to explore the world from a different view and play as some of those critters and their unique abilities. Hop along as a frog and surprise your prey with a long range tongue attack! Crawl around as a beetle and infiltrate an abandoned structure to learn more about this strange new world. Even flutter from tree to tree as a praying mantis! You’ll also be able to play as a salamander, beetle, frog, spider, scorpion and many others.

Stalk Your Prey—And Eat It, Too

Everyone’s got to eat! A famished sugar glider can’t glide and that’s when the hunt begins. Quietly stalk your prey from behind the grass or embark on a chase to catch small animals and insects to replenish your energy.

Sometimes, the hunter becomes the hunted. This little glider will encounter all manner of predators. In the coral snake boss battle, your quick actions will determine whether or not he makes it out alive.

You’ll have to be quick. When this great foe performs a long range attack, you’ll have to dodge at just the right time to perform a counter attack while he’s still stunned. If you manage to avoid his deadly attacks you’ll exhaust and overcome this great predator.

PlayStation 5 Offers the Most Immersive Experience

The PlayStation 5 version of the game supports our highest graphical setting, “Documentary Experience.” It leverages PlayStation 5’s impressive specs to highlight every detail of a world designed to live and breathe and truly brings it to life.

InfectedAI ⋅ Smashing The Battle: Ghost Soul coming to Switch on August 19 in Japan ⋅ 9 minutes ago