Over 15 minutes of gameplay debuting on April 29. 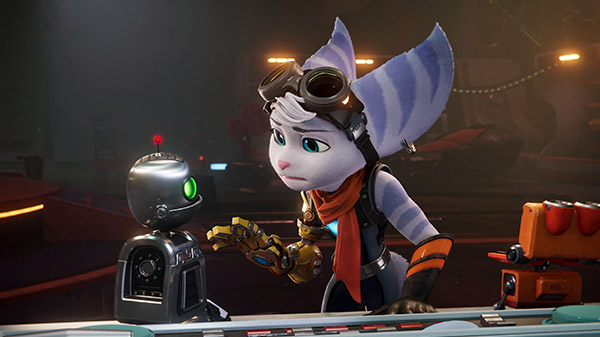 “Rivet is a Lombax resistance fighter from another dimension, where organic life is hunted by the evil Emperor Nefarious,” Insomniac Games creative director Marcus Smith said in a PlayStation Blog post. “You saw brand-new locations like Nefarious City, and alternate-dimension twists on old favorites like Sargasso and Torren IV along with a sneak-peak at some new weapons and gameplay mechanics.”

Smith continued, “The song we chose for the trailer has special meaning beyond just being a great, exciting track. It is from the (Rock n’ Roll Hall of Fame nominated) band DEVO, a personal favorite of mine, but, some would say more importantly, the band that the incomparable Mark Mothersbaugh co-founded. I’m excited to announce that Mark is the Composer of the Rift Apart soundtrack! Beyond his work in DEVO, you’ve likely heard his compositions across the years whether it was in the original three Crash Bandicoot and Jak & Daxter games, as well as animated series like Rugrats, and the blockbuster film: Thor Ragnarok. We are so thrilled to be collaborating with Mark and cannot wait for you to hear the incredible score he’s come up with.”

Over 15 minutes of gameplay will debut during a Ratchet & Clank: Rift Apart-focused State of Play broadcast on April 29 at 2:00 p.m. PT / 5:00 p.m. ET. You will be able to watch it on YouTube (English, Japanese) and Twitch.

ViperAcidZX ⋅ ExZeus: The Complete Collection announced for PS4, Xbox One, Switch, and PC ⋅ 3 minutes ago