A relentless and fast-paced shooter. 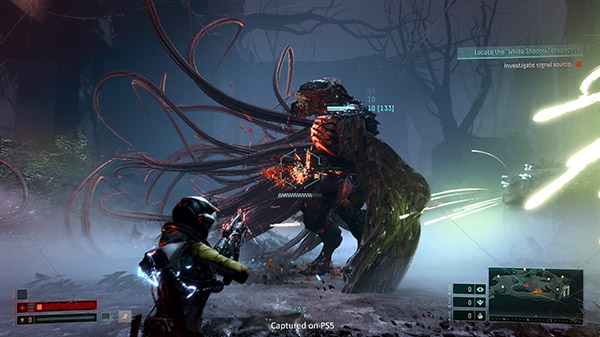 Returnal‘s gameplay is a relentless and fast-paced shooter in the beginning. We’ve taken a lot of inspiration from the different genres (roguelikes and other likes) and created something really special that offers a unique challenge with a strong focus on the tight gameplay we’re known for.

As a fresher component to a Housemarque game, the State of Play also touches upon the ways we create a tangible atmosphere, where you’ll piece together the story’s mysteries. We recently shared a bit more about the world of Returnal in our “Atropos” video. Narrative is a big part of the Returnal experience, though we’re telling that story in some subtle ways: You’ll encounter voice logs and glimpses of different realities on your journey, without distracting you from the bullet hell action of the main game. This all adds up to a layered and personal story that we can’t wait to have you get stuck into – especially the playable sequences which you’ll learn more about very soon…