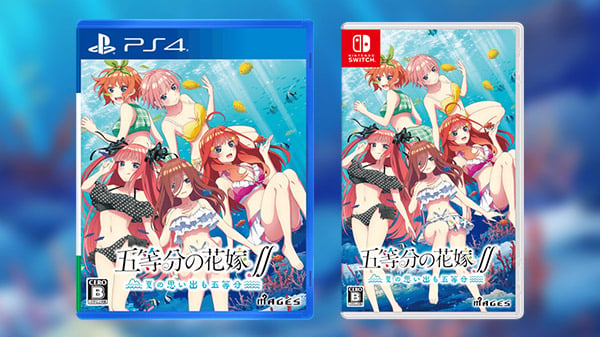 Mages. has announced “heart-pounding deserted island life with quintuplets adventure” game Gotoubun no Hanayome ∬: Natsu no Omoide mo Gotoubun (The Quintessential Quintuplets ∬: Summer Memories Also Come in Five) for PlayStation 4 and Switch. It will launch on March 25, 2021 in Japan for 7,800 yen at retail and 7,000 yen via download. A 10,800 yen limited edition including a five-disc drama CD will also be available.

The game will follow a completely original story in which you will spend your days with the Nakano quintuplets on a deserted island.

Here is an overview of the cast:

Update 11:20 a.m.: Pre-orders have gone up at various Japanese retailers such as 7net, Amazon, Biccamera, and Yodobashi, which provide the following description:

The mega-hit romantic comedy manga The Quintessential Quintuplets has sold over 13 million copies and has been adapted into a TV anime series, the first season of which aired from January to March 2019 to high acclaim. Now, the popular series is being adapted into a console game! The second season of the TV anime, The Quintessential Quintuplets ∬, will air from January to March 2021, making now the perfect time to release a game.