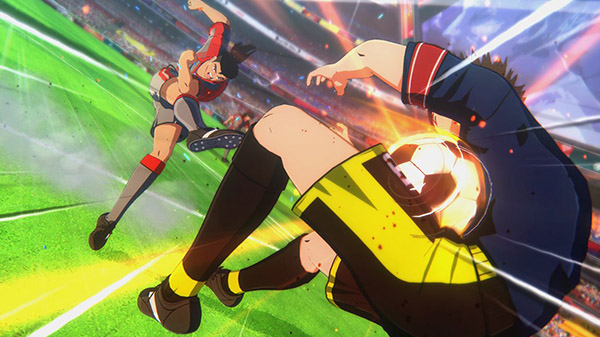 Publisher Bandai Namco and developer Tamsoft will release the version 1.10 update for Captain Tsubasa: Rise of New Champions on December 2, followed by downloadable content characters Stefan Levin, Singprasert Bunnaak, and Ricardo Espadas as part of the Character Pass on December 3, the companies announced.

Get the details below, via producer Tsuzuki Katsuaki on Bandai Namco Entertainment Europe.

The first character is Stefan Levin.

Some fans might notice that Levin and other new characters are also in his 15 years old because Rise of New Champions is based on Middle School arc.

His skills have been consisted with his high technique, so Levin is very well balanced and usable character.

You can use “Aurora Faint” which would be familiar with you. However, we provided the original shot for him by considering the time line. These new additional characters will be able to build into your dream team.

Moreover, you can make to happen the training event in “Episode of New Hero” by setting the Friend Card, and they will teach you their useful skills.

You haven’t had a chance to communicate with 15 years old Levin, so we hope you enjoy it.

We set him as very powerful character so when he succeeds in the tackle, he will kick a ball even involving a body of opponent, so he could take the ball away while blinging an opponet down.

Some player may have question that why Bunnaak is Jr-Youth player though Levin is an Honorary player.

It’s because when we wrote the scenario, we had made the list of participants for the Jr-Youth World Championship, and actually Thai Jr-Youth haven’t appeared on the story but they were one of the participants.

Of course, Bunnaak will tell edit player his useful skill and techniques through the training event.

The third character is Ricardo Espadas from Mexico Jr-Youth.

He is known as very aggressive player though he is a goal keeper, but since the goalkeeper in this game also act as a spirits gauge, so it was very hard to characterize him.

I think the people who played the game so hard already realized that goal keepers will not lose their spirit gauge other than save shots. Once they lose the spirit gauge, it will take time to recharge it, but in terms of Espadas, he can recharge his spirit gauge by succeeding the dribble, so it can be said he takes high-risk, high-return and can change the situation.

His parameter would be less than Wakabayashi and Muller, but he will be very exciting character if you could use well.

This time, we will add Otomo Middle School in Shizuoka, which is led by Urabe. I thought it was as good as it gets, that many fans expect Otomo Middle School from the keywords such as “never give up” and “rebellious spirit” I said in the previous live streaming.

Of course, you can see the characteristic features of each team player in the story. The core of the team is a counter and there are multiple choices for your edit character that he can support Nitta by making a pass, play as a wing with Nitta, or can join as a defender and make the team defense stronger.

There are couple of difference from other routes such as “Team Gauge” and “Appeal Command,” so we hope you can also enjoy it.

It had been already announced, and we will add Assist Mode which was requested by many players.

It will be applied only for “Episode of Tsubasa” to avoid affecting on power balance of edit player, but you can choose between two kinds of assist, and it makes really easier to proceed the story. Of course if you turn it off, you can play in the same difficulty level as before.

We will recommend it for people who are interested in the title but not good at playing the action game.

We received a lot of feedback especially about power balance on the online matching when we launched the title and released the version 1.02 update.

For example, Tachibana brothers are too strong. There are some feedbacks pointed out which will bother the ideal game play which we intended, so we will do the first balance adjustment for some parts.

As we write here, an intentional reinforcement becomes possible by adding shots skills on edit player, so we will adjust the power balance.

The adjustment for shots and move might make training on “Episode of New Hero” difficult, so we adjust shot stats. We will make adjustment for Skylab Hurricane which effective range is far wider than other block skill and was pointed out by many users. We have got many feedbacks other than we talked today, and we will continue discussing. We will work hard to make some adjustments to make the game more playable so please wait for a while. And the contents what we shared today will correspond to the red box in the roadmap.

We will work on not only new downloadable content characters, but also the free updates and balance adjustment to make the game environment more comfortable.

Captain Tsubasa: Rise of New Champions is available now for PlayStation 4, Switch, and PC via Steam.

Chicken Permission The Cutlet ⋅ A Plague Tale: Innocence coming to PS5, Xbox Series, and Switch on July 6 ⋅ 17 minutes ago