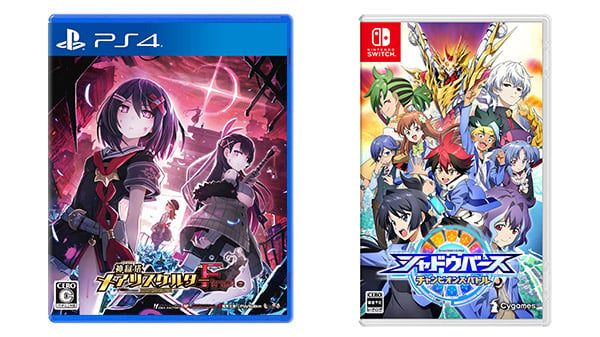 Mary Skelter Finale for PlayStation 4 and Switch, and Shadowverse: Champion’s Battle for Switch are the highlights of this week’s Japanese video game releases.

As its name suggests, Mary Skelter Finale is the finale to the Mary Skelter dungeon RPG series. The game features six protagonists, each with their own group of characters, and various new systems on top of systems returning from previous entries. For players who have yet to experience the Mary Skelter series, the game offers a “Before Story” system that depicts the story scenes of Mary Skelter: Nightmares and Mary Skelter 2 in their entirety.

Shadowverse: Champion’s Battle is the first console game entry in the digital card game series, plus Cygames’ first title for Switch. Based in the world of the Shadowverse anime, the story unfolds at Tensei Academy, where players must use their power to assemble friends and save the Shadow Club on the verge of shutting down. In addition to card battles, players will also be able to run around the world of the anime.

Also new this week, Bandai Namco will release a “Premium Edition” of Ace Combat 7: Skies Unknown, which includes the base game plus previously released downloadable content and updates, and Warner Bros. Interactive Entertainment will release Bakugan: Champions of Vestroia, an action RPG based on the Spin Master and Sega Toys franchise.

GranblueTos ⋅ Utawarerumono: Mask of Deception and Mask of Truth delisted from PlayStation Store in the west as licensing expires ⋅ 52 minutes ago
Latest Open Forum