An unlikely duo of fighter and mage. 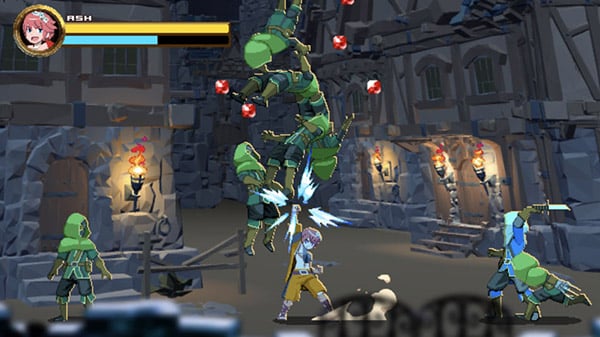 Studio Pico, a two-man developer based in Japan, is currently in the early stages of development on Grand Exile, a pixel art 2D action and shooting game hybrid planned for release on Switch and PC.

The developer plans to eventually launch a Kickstarter to fund development of Grand Exile, but told Gematsu that it must first finish putting together a presentable mockup. It recently found a new programmer after losing its only programmer early on in the development process, and hopes to enter full-scale production at the start of the new year.

Studio Pico has past experience in 2D fighting and shooting action games—including the creation of character sprites for “big titles that everyone knows about”—and wanted to mix the two gameplay styles. It hopes to utilize the skills it acquired working on previous titles to develop this all-new independent work. The developer avoided going into detail about the specifics of its past works.

An action game with the pixel art visuals of the 80s and 90s and an excessive sense of impact. It’s not just nostalgic, it also has plenty of rich screen effects that utilize today’s technology. It’s a new kind of fighting action game with a nostalgic, yet somewhat new feel to it.

We’re preparing for a Kickstarter to eventually launch on Switch after the game’s global rollout on Steam.

The variety of player actions is important, but more importantly, the enemies who take them on. Reaction is also an important factor in fighting action. The game offers a very primitive “hit and blow” feel to the enemy. Emphasis is placed on creating a beat that is light in action, but still feels heavy.

A new fighting game for the post-Smash Bros. era, this game is easy to understand and mixes the best of both beat ’em up action and side perspective to create an unlikely play experience that will be overly exhilarating for everyone.

The animation pattern-rich, old-fashion pixel art style is retained, while real-time lighting and rim-light shaders are used to create richer graphics. A new visual experience is encouraged by the combination of well-crafted, pixel art graphics and the latest technology.

The biggest highlight of the game is the intense battles against giant bosses that can’t fit on the screen. You’ll punch, kick, blow up, and sometimes throw away huge enemies in dynamic action-packed chaos. You can enjoy ruinous battles. Boss characters have special stages with special effects, and can fight from the whole screen. You will feel the dynamism.

Short-kill and long-kill multiplayer with experts in each! For example, the mage fires a special shot at an enemy flung away by the fighter, or the fighter uses a series of attacks on an enemy bound by the mage’s shot. These various combinations of cooperative skills that make the best of each character’s abilities allow for three-dimensional gameplay.

By landing combos, monsters will discharge growth items called “Soul Gems,” which you can use to develop your character. You can develop characters to your liking depending on the route you take. Growth is not just limited to learning new special moves—you can also reduce the rigidity of movement speed and techniques, and the like. The higher the combo, the more Soul Gems you will get, so creating your own combos is one of the key elements of the game.

The Mandrake outbreak is the catalyst for the resurrection of the “Dark Evil God” that once drove humanity to the brink of despair. The protagonists get caught up in a battle against the cult plotting his resurrection. With a story featuring peculiar characters and a spirited tone all the way through, players can enjoy a dialogue-driven drama that progresses in skits through light conversation and pixel art.

Episode 2: About the Characters

Episode 3: About the Navigator

Episode 4: About the Battle System