Dig into the remake with co-director and scenario designer Motomu Toriyama. 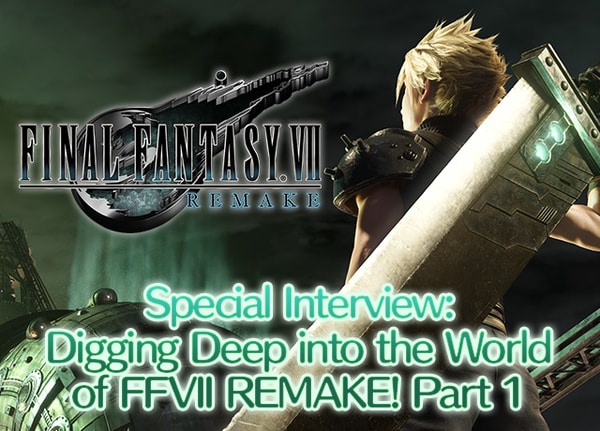 The Final Fantasy Portal Site has published the first of a two-part special interview series dubbed “Digging Deep into the World of Final Fantasy VII Remake” with co-director and scenario designer Motomu Toriyama. Part two will be published on August 12.

Get the full part one interview below.

—We were surprised to hear “Main Theme of Final Fantasy VII” playing in the Sector 7 slums! Was there a reason for that song choice?

—What were the drinks that Tifa made at Seventh Heaven?

Toriyama: “First was the popular Seventh Heaven, a drink that packs a serious punch and gives you the courage to keep going. Her second creation was a Cosmo Canyon, a burgundy-colored cocktail inspired by the location of the same name. There are also other drinks on the menu at Seventh Heaven, such as a Lifestream, which possesses a green hue.

“Tifa’s showmanship with the shaker comes from her natural dexterity and her keen observation that the regulars are more generous tippers when she puts some flair into her bartending.”

—There are several new characters in Final Fantasy VII Remake who did not appear in the original, including the mysterious young man Chadley. Could you tell us a little about his past?

Toriyama: “You can learn about Chadley’s origins by clearing his battle reports. While some of the quests pose a serious challenge, you’ll need to complete them to discover his past.”

—There are so many cats in the Sector 7 slums. Is there a cat lover on the development team?

Toriyama: “Sector 7’s excessive number of cats can be attributed to Wedge. He loves the furry critters so much, he can’t help but bring any stray he finds back home with him. As for cat lovers on the dev team, co-director Naoki Hamaguchi (game design / programming) is one, so he had his cat rendered in-game. Personally, I wanted to make sure dog people weren’t left out, so we decided to even things out by increasing Midgar’s canine population. That’s why Marle—the landlord of Stargazer Heights—can be seen with her own loyal companion.”

—Wedge’s cats seem a little on the large side. Could that be a case of pets resembling their owners?

Toriyama: “Wedge’s cats eat just as much—and as often—as he does, so any animal in his care is going to grow very quickly.”

—There’s not much plant life under the plates of Midgar, but so many flowers bloom around Aerith’s house. Is there a reason for that?

Toriyama: “The large river running through the outskirts of Sector 5’s undercity brings fresh water, rich with nutrients from the planet’s lifestream, to both Aerith’s house and the dilapidated church. This is the same water Aerith uses to lovingly tend to her flowers. Also, the fact that Aerith is an Ancient could be another reason for the vibrant vegetation there.”

—When trying to sneak out of Aerith’s house at night, did the number of obstacles decrease with each failed attempt, or was it just our imagination?

Toriyama: “Despite being mad at Cloud, Aerith cleans up the mess bit by bit to make it easier for him to sneak out. To give you some behind-the-scenes info, we wanted to spook the player a bit when Aerith scolds Cloud, which is why she sounds so scary when scolding him. Aerith is waiting for Cloud after he leaves anyway, so maybe she was just playing with him. Kind of terrifying when you think of it like that.”

—Despite being a child, the items Moggie sells are impressive. Where does he get them from?

Toriyama: “There are plenty of passionate moogle medal collectors out there, even among adults, and it’s through them that Moggie’s able to trade for the rare items he offers Cloud. Moggie is one example of how even kids living in the Sector 5 undercity are tough and resourceful.”

—Isn’t Rude unusually nice to women? He kept putting them to sleep in battle.

—How was the Guardian Angel of the Slums character created?

Toriyama: “The character Mireille originally appeared in a novel portraying events following Final Fantasy VII’s Meteorfall, called Final FantasyY VII: The Kids Are Alright: A Turks Side Story, and we decided to include her in Final Fantasy VII Remake. After some deliberation over how she would have spent her time in Midgar, we came up with the idea of her being a Robin Hood-style thief for the people of the slums.”

—Kyrie and Leslie are also from that novel. What reasons were there for including them in Final Fantasy VII Remake as well? Did you provide them with more backstory?

Toriyama: “Because Kyrie and Leslie were both part of that story, we decided to include them in the game as undercity residents. From the very beginning of development, we wanted Final Fantasy VII Remake to feature characters from the larger Final Fantasy VII universe—characters who weren’t a part of the original. So, we came up with pasts for these characters that would fit with their stories in the novel. Leslie in particular got a lot of screen time since he was one of Don Corneo’s lackeys, involving him in the main story.”

—Even the background characters out and about in the city have a lot of personality. Do you have a favorite?

Toriyama: “A great deal of NPC characters and dialogue from the original game—a lot of which I worked on—were repurposed for Final Fantasy VII Remake. That’s always fun to see. Of the NPCs, the lovey-dovey couple at the Sector 7 slums train station is my favorite.”