Plus Ninjala physical edition, Dragon Marked for Death for PS4, and more. 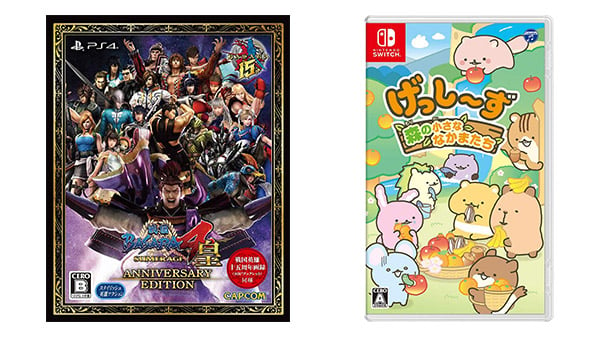 Sengoku Basara 4: Sumeragi Anniversary Edition for PlayStation 4 and Gesshizu: Mori no Chiisana Nakama-tachi for Switch are the highlights of this week’s Japanese video game releases.

Sengoku Basara 4: Sumeragi Anniversary Edition is a re-release of the July 2015 action game in celebration of the Sengoku Basara series’ 15th anniversary. It includes the full game and 56 pieces of downloadable content on the disc, as well as a download code for 10 additional pieces of downloadable content and an 80-page special booklet titled “Sengoku Heroes 15th Anniversary Art Book.”

Gesshizu: Mori no Chiisana Nakama-tachi is a “heart-warming communication game” in which you must collect “Happy Feelings” to grow the “Happiness Tree” that little creatures called “Gesshizu” have planted in the forest. You will take care of the Gesshizu, collect over 200 of items such as decorations and accessories, and be able to play a total of 15 mini-games with multiplayer support.