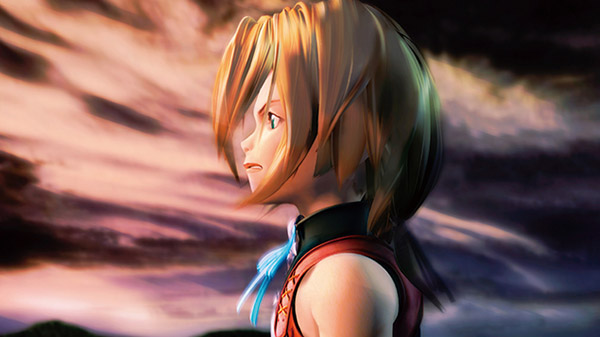 Get the full interview with Itahana below.

―Final Fantasy IX is often known as a title that’s about “returning to roots” of Final Fantasy series games. Are there any scenes from the game that ring true to that theme in your mind?

―Each main character of Final Fantasy IX carries their own background story into the battles they face. Do you have a favorite? Please tell us why as well.

Itahana: “I’m quite fond of Vivi, but I have to say that Zidane might be my favorite. Strong yet with a kind compassion for others—he’s a true hero in my mind. The fact that he’s a joker who doesn’t conduct himself like such a hero makes him all that much more wonderful of a character.”

―Of course the main characters are well-established, but there are some truly unforgettable NPCs filling out Final Fantasy IX’s world as well.

Itahana: “There’s lots of characters in Final Fantasy IX whose backgrounds I’m curious about. Like, how Baku managed to bring the Tantalus theater troupe together from such a diverse group of characters, or why Cid was so trusted by everyone. And Vivi, for example—how did he get the play ticket and make his way to Alexandria? That’s just one of the things I’d still like to know. As for NPCs, I really like Marcus from Tantalus. He’s the type of guy who works behind the scenes supporting his comrades, but isn’t afraid to take action when the situation calls for it. I’d love to know how he came to join Tantalus.”

―On top of Baku and Marcus, Tantalus had a lot of unusual members such as Zenero and his siblings too.

Itahana: “The Tantalus theater troupe was primarily designed by the art director, Mr. Minaba. At first, during development there was talk of Ruby being an oyama [traditional Japanese Kabuki theater term, referring to a male actor who plays female roles], although I’m not sure how the official lore on that ended up. The other Tantalus members’ backgrounds were always a mystery, even during the character planning stages. Someday I’d like to hear about their origins in depth.”

Itahana: “I wasn’t part of the development team when it was decided that Final Fantasy IX’s characters would be shorter than before, so I don’t know the reason. However, I think the way the characters are almost overly expressive with big exaggerated body language looks great because of their shorter statures, and I feel that matches very well with the motifs of “theater” and “stage” that permeate Final Fantasy IX.”

―The CG screenshots overlaid with character lines that play when the game loads are another memorable way that Final Fantasy IX showed its characters.

Itahana: “The character poses in that art ended up primarily used for promotional and UI purposes. Art director Mr. Minaba and I made the art by giving the CG team pose ideas and then painting over the CG they got back to us.”

―We think that Mr. Uematsu’s music played a large part in expressing Final Fantasy IX’s unique characters and world. Are there any songs from the soundtrack that are particularly memorable to you?

Itahana: “There are a lot of well-known songs from Final Fantasy IX so I’d like to talk about one that doesn’t get much attention. I love “Quina’s Theme.” The banging rhythm of the drums when the song starts—that strong, steady sound gives me a lot of courage. When I’m super overloaded or really feeling the pressure of an approaching deadline, in the middle of the night I’ll often listen to ‘Quina’s Theme’ while working.”

―We heard that you did some Final Fantasy IX illustration commissions for Coca-Cola [commercial and figures exclusive to Japan]. Is there anything you were especially careful about because it was a collaboration?

Itahana: “The request for the Coca-Cola collaboration characters came when the design work for Final Fantasy IX’s development was almost finished, so I had very little trouble designing them. If Tantalus were the official royal family band, I imagined that they would be a wandering troupe that comes to Alexandria once a year – that’s the image I used when designing for the collaboration.”

―Final Fantasy IX has a lot of mini games, many of which are quite difficult. Are there any that you remember in particular?

Itahana: “The one I played the most was Tetra Master, which I took part in the design of. But the mini game that stands out most in my mind is probably Ragtime Mouse’s quiz. He asked a lot of tough questions! My favorite mini game music is from the sword fight mini game—‘Vamo’Alla Flamenco’!”

―Speaking of the quiz mini game, Final Fantasy IX has a lot of monsters with unusual gimmicks. Do you have a favorite monster?

Itahana: “I’ve already mentioned Ragtime Mouse, so aside from that… I suppose Armstrong. You can see the little legs sticking out the bottom and it’s always wobbling back and forth. It’s just too cute.”

―Were there any other interesting happenings or things you struggled with that you particularly remember from development?

Itahana: “In the credits I’m categorized as a character designer, but during the later stages of development I did overpainting of large prerendered background images. That included adjusting colors in areas of the background that we wanted users to look at to stand out more, or lowering the color saturation in areas that didn’t need to be looked at so much. You’ll notice if you check the map of Alexandria’s pub, but the color saturation is adjusted in such a way that places where the player can move or where characters will be placed are well lit, and places other than that have their color saturation adjusted so dark that they’re almost gray. The stairs are also broken so as to keep the player from trying to go upstairs – that’s hand-drawn as well. It was tedious work that took a lot of patience, but I learned a lot about drawing from it.”

―For our last question, we’d love for you to share some of your feelings about working on Final Fantasy IX, and a message for the many fans who still love it.

Itahana: “Now that its 20th anniversary is here, I’ve been hearing a lot about how Final Fantasy IX is always highly praised in polls about FF games both in Japan and the west. I feel that it is a game with a timeless story, a strongly established theme and lovable, truly unique characters. On the 20th anniversary of Final Fantasy IX it would make me very happy if people who have yet to experience this game gave it a shot, or those who played it 20 years ago tried it again. I hope each player finds a character that resonates with them.”

Tales of Crestoria in "final stages," launches "in the near future" Previous post
QuakeCon at Home 2020 set for August 7 to 9 Next post