Dragon Quest XI S: Echoes of an Elusive Age – Definitive Edition coming to PS4, Xbox One, and PC on December 4

The enhanced and expanded version of Dragon Quest XI. 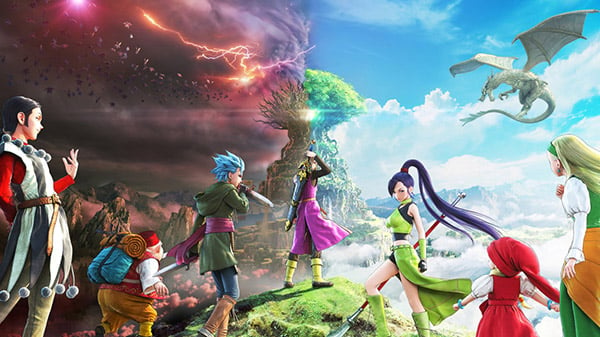 Square Enix will release Dragon Quest XI S: Echoes of an Elusive Age – Definitive Edition for PlayStation 4, Xbox One as an Xbox Play Anywhere title, and PC via Steam and the Microsoft Store on December 4 worldwide, the company announced at the Xbox Games Showcase pre-show. It will also be available via Xbox Game Pass.

Dragon Quest XI: Echoes of an Elusive Age first launched for PlayStation 4 and 3DS in July 2017 in Japan, and for PlayStation 4 and PC in September 2018 worldwide. Dragon Quest XI S: Echoes of an Elusive Age – Definitive Edition, an enhanced version of the original game with numerous new elements, launched for Switch in September 2019.

Here is an overview of the game, via Square Enix and Steam:

Dragon Quest XI S: Echoes of an Elusive Age – Definitive Edition promises to be an enthralling and unmissable adventure for RPG fans. The perfect first step into the world of Dragon Quest for the uninitiated, players will follow the perilous journey of the Luminary, a hunted hero who must uncover the mystery of his fate with the aid of a charismatic cast of supporting characters. Embarking on a quest taking them across continents and over vast oceans, they will learn of an ominous threat facing the world. Packed with over 100 hours of content from the critically acclaimed 2017 release of Dragon Quest XI: Echoes of an Elusive Age, this definitive version also brings with it an array of upgrades and enhancements including:

A young man, about to participate in his village’s coming of age ceremony, travels to a sacred stone alongside his childhood friend. After a series of unexpected events, this intrepid adventurer learns he is the reincarnation of a legendary hero from a forgotten age.

The young hero sets forth into an unknown world on a journey to unravel the mystery of his past… but the welcome he receives is far from warm. Upon revealing his identity to the King, the hero is branded as “The Darkspawn” and hunted by a relentless army.

Fleeing from his pursuers, the hero assembles a band of endearing adventurers who believe he is actually The Luminary reborn. The Luminary and his newfound companions embark on a quest that will take them across continents and over vast oceans as they learn of an ominous threat facing the world.

What are the differences from the Nintendo Switch version?

Unfortunately, this is not possible.

Are there any differences between the PlayStation 4, Xbox One, Game Pass, and Steam versions of this release?

What’s included with my purchase of the game?

Is it possible to synchronize data between the Xbox One and Windows 10?

Yes. Please refer to the store page for more details.

Can I create multiple saves?

You can have up to nine separate saved games, and there’s also an autosave slot.

How do I switch between 3D mode and 2D mode?

It’s possible to switch between the two modes mid-game at any church or campsite. When you switch, you’ll need to select either your current ‘chapter’ or one you’ve already completed, and you’ll begin play from that point in the story.

As a rule, most information (including party members’ levels and attributes, your inventory, your battle history, Draconian Quest choices, quest completion status, accolades etc.) will be carried over from one mode to another unless there is a story-related reason for this not to be the case. You will also be unable to carry over your progress through Drustan’s Labyrinth.

Can I play without an internet connection?

Yes. It’s possible to complete the game without an internet connection.

Can I turn voices on and off?

Can save data from the demo version be carried over into the full game?

Yes, it’s possible to use save data from the demo version with both the digital and physical versions of the main game.

How do I switch between Japanese and English audio?

Is the story different from the Nintendo Switch version?

No, it’s exactly the same.

What’s the difference between this title and the previously released Dragon Quest XI for PlayStation 4? (Have the graphics been improved, for example?)

What will happen to the trophies I earned in Dragon Quest XI for PlayStation 4?

This is a completely separate title to Dragon Quest XI. The trophy library is therefore also separate.