Includes base game plus all six expansions. 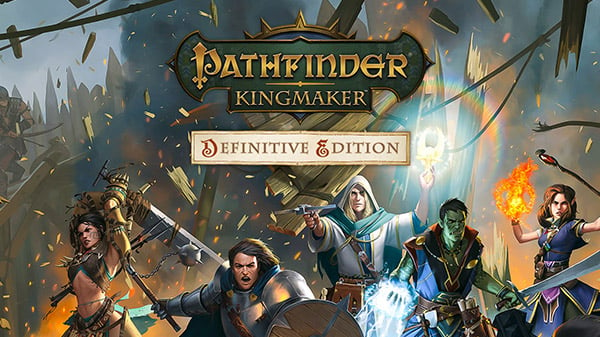 Publisher Deep Silver and developer Owlcat Games will release Pathfinder: Kingmaker Definitive Edition for PlayStation 4 and Xbox One on August 18, the companies announced during IGN’s Summer of Gaming 2020 live stream.

Pathfinder: Kingmaker Definitive Edition includes the Pathfinder: Kingmaker base game, as well as the “Beneath the Stolen Lands,” “Varnhold’s Lot,” “Bloody Mess,” “The Wildcards,” “Arcane Unleashed,” and “Royal Ascension” expansions. There is also a new a turn-based combat mode, which will be added to the PC version via a free update.

“The turn-based mode brings the game even closer to the tabletop experience, providing the players with more precise control over the battlefield,” said Owlcat Games head of studio Oleg Shpilchevskiy in a press release. “Our point was to have both modes—real-time with pause and the new turn-based mode—in a perfect co-existence so players can smoothly switch between both to adjust the gameplay at any time to their needs. It settles the long-running debate among the fans which mode is better for Kingmaker since they can go from an action-oriented real-time combat style to a more tactical one within a single encounter.”

Pathfinder: Kingmaker takes players on tour through the infamous Stolen Lands, the dangerous and turbulent territories well known within Pathfinder fandom. The computer RPG revisits familiar characters and well-known locations of the “series” lore and treats players to brand new adventures, deadly foes, and unforeseen twists and turns. Fans of the fantasy pen-and-paper RPG will experience its epic, heroic universe in new ways while computer RPG gamers will discover their favorite genre in a more contemporary light, in stunning 3D graphics that bring the universe to life.

Pathfinder: Kingmaker will challenge players as both adventurers and rulers as they claim explored lands and carve their kingdom from the wilderness. Kingdom founding goes beyond simple stronghold-building to become a true reflection of the hero’s character and choices made throughout the game. Each kingdom is a living thing shaped by alignment, choices, allies, and the hero’s ability to lead his or her people.