Published by Versus Evil. 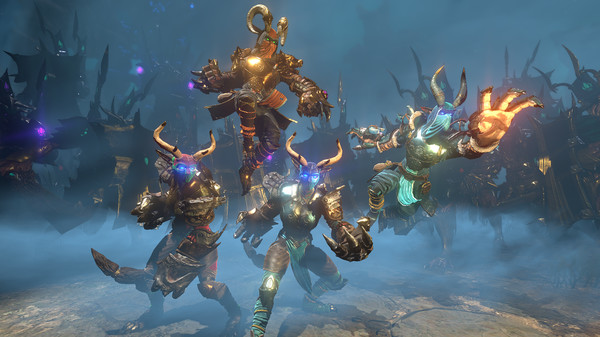 Versus Evil will publish Runwild Entertainment-developed third-person cooperative action RPG Almighty: Kill Your Gods for PC via Steam this fall with console versions to follow, the company announced.

“Almighty: Kill Your Gods is an action RPG that empowers the player on many different levels and allows them to craft a unique player experience,” said Versus Evil general manager Steve Escalante in a press release. “Gamers are going to love the frenetic action and deep customization. Plus, there’s something really satisfying about taking down a giant monster and hauling off with its still-beating heart. We pride ourselves on our history of publishing truly exceptional RPGs and Almighty will be the next title to join their esteemed ranks.”

Hunt demons, monsters, and gods solo or online with friends in this action RPG. Run, leap and fly across islands, ripping your foes to pieces, and rebuilding your home with their remains. You are an Alpha, the first amongst your kind, a magical warrior infused with the power of your ancestors, reborn to take a stand for your tribe against the tyranny and oppression of the Elder Gods. Combine fierceness for your enemies with kindness for your tribe as you unlock the knowledge of your ancestors and their use of magic on your path to becoming Almighty.

Jump, double jump and glide around the environment like a magical ninja, quickly sprint around on all fours drawing on your animalistic nature. Use slam attacks to smash down from high, with the longer the dive the greater the damage inflicted, and use charge attacks to slam head first into battle and knock enemies out of the way.

Use magic gauntlets for devastating ranged or melee attacks, shoot fireballs into your enemies face or smash them into next week with your metal fists. Activate magic amulets to summon powerful spells that add to the magical destruction of demonic creatures, guardians, monsters and the very gods themselves, and rebuild your shattered Home Island with their remains that you loot and extract.

Utilize a huge array of Power Stones in your Gauntlets, that provide different magic powers to exploit enemy weaknesses. Shoot balls of lightning, globs of magic that stick to enemies which can then be shot to explode, activate shields that deflect projectiles, and send tethering streams of healing energy that help allies.

Upgrading and customizing your characters gear sets will provide you with the power to take the fight to the enemy, looting their islands and taking back what is yours. Upgrading your Home Island and protecting the kindred that live there by building defensive towers and farms to boost its economy, will provide you with a power base from which to explore and return from the hunt. Create your own character classes for your own unique playstyles, and tactically swap them out during play to deal with different scenarios.

Take the hunt to enemy controlled islands that dynamically react to your actions. A solitary mineral hunt can quickly escalate to an all-out epic battle if you are detected and anger the gods. Different creatures appear as night falls and day breaks providing different threats and challenges.
Some of your work is not for the squeamish. Take the head of a Guardian you have destroyed or the heart of a Monster that has exploded out of its chest, and carry them to an extraction portal to send back to your Home Island. Protect the portal when activated as magical storms ensue and enemies try to stop the spell from completing and you collect your hard-earned loot.

Run as a lone wolf or team up as a pack with friends or players you dynamically encounter online whilst exploring in seamless co-operative play. Create different tactics to take down bigger and more powerful enemies by combining different player loadouts and helping each other progress more quickly as a unit.

Hunt your enemies. Provide for your kindred. Protect your home. Kill your gods.