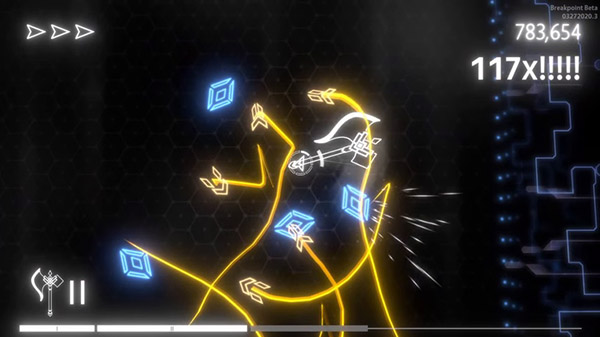 Publisher The Quantum Astrophysicists Guild and developer Studio Asethesia have announced Breakpoint, a “twin-stick slasher” for Switch and PC (Steam). It will launch in 2020.

“We really wanted to capture the purity of retro arcade games, but mixed in with a few modern sensibilities,” Studio Asethesia said in a press release. “The melee weapons force you to weave through enemies and get up close and personal, while the weapon explosion system allows you to turn a tense situation into a huge comeback, leading to some really exhilarating moments.”

Here is an overview of the game, via The Quantum Astrophysicists Guild:

Breakpoint is a stylized twin-stick arcade game. Defeat waves of enemies with melee weapons that EXPLODE after reaching their breaking point, dealing devastating damage across the blast zone.

Breakpoint is inspired by early 2000s arcade titles like Geometry Wars, where action and mayhem go hand in hand. Grab hold of a hammer, double-sided ax—even a katana!—and other weapons to conquer waves of enemies.

Watch the announcement trailer and a gameplay video below. Visit the official website here.

Steampunk-inspired Metroidvania game SteamDolls: Order of Chaos coming to PS4, Xbox One, Switch, and PC in 2021 Previous post
Arrest of a Stone Buddha coming to Switch on May 21 Next post