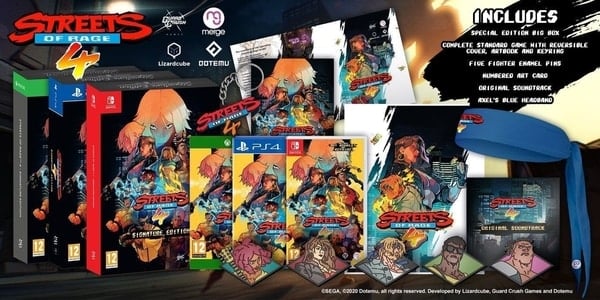 Merge Games has announced physical standard and “Signature” editions of Streets of Rage 4 for PlayStation 4, Xbox One, Switch, and PC due out this summer.

These physical releases are separate from the previously announced Limited Run Games physical editions for PlayStation 4 and Switch. Pre-orders for those are available now and will close on May 10.

Pre-orders are available now at the following links:

Here is an overview of the game, via Dotemu:

The first mainline series entry in more than 25 years, Streets of Rage 4 infuses the series’ classic elements with a modern evolution of gameplay, art and design, giving fans an authentically faithful tribute which still offers a distinctive experience.

Streets of Rage 4 is available now for PlayStation 4, Xbox One, Switch, and PC via Steam.

Watch a trailer below. View a set of box shots at the gallery.