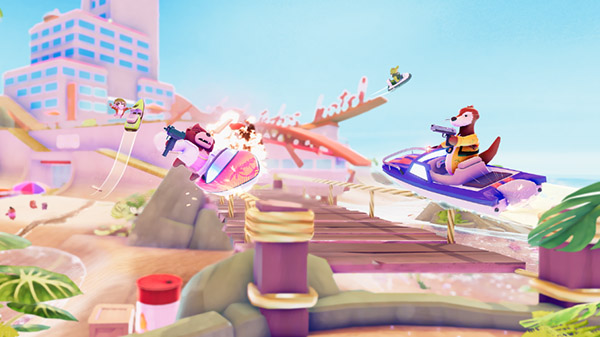 “It’s been way too long since a good skateboarding game like Tony Hawk’s Pro Skater came out, hasn’t it?” said Funktronic Labs co-founder Eddie Lee in a press release. “Look, we all know everyone needs a fun arcade skating game in life, but what we didn’t know is that you can do skateboarding tricks on boats too. And thus, Wave Break.”

Wave Break is also planned for release on PC via Steam.

Here is an overview of the game, via Funktronic Labs:

Skateboating… with guns, Wave Break is set in a crime-filled, 1980s era Miami Vice-inspired world, filled with outlandish characters and a fresh synthwave soundtrack. Uncover the rivalry firsthand between the Mafia’s Big Pin and Detective McHutchenson in an episodic storyline involving guns, kickflips, and blood money.

Play through the campaign or one of many other modes, both online and offline with friends, or strangers. Whether you want to rack up points in Trick Attack or shoot your friends’ Boaty McBoatface off in Deathmatch is up to you. Various playable characters with unlimited* customization potential. From tropical beaches to frozen tundras, there’s no place on water or land that won’t float your boat. ;)