Due out worldwide on April 23. 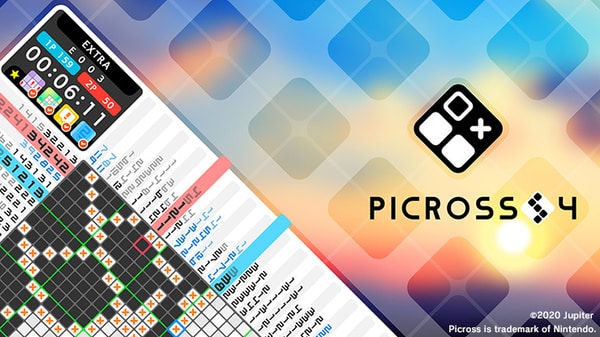 The highest number of puzzles in the Picross S series with a total of 485 in all! Included with bonus content, Extra, featuring large Picross puzzles!

Enjoy four different modes with distinct features: Standard Picross, Mega Picross with Mega numbers, Color Picross with colored hints, and Clip Picross that reveal a story as they are completed.

There are two 30×30 large Picross puzzles for you to solve. Link the play data from Picross S, Picross S2, or Picross S3 to unlock an even larger 40×30 Picross puzzle for every game played, up to a maximum of three.

The controls are the same as Picross, but the puzzles are bigger and there are more squares to count so take advantage of the Count function while you play.

In multiplayer mode, the triangle marker used to differentiate squares filled by different players will now work not only on filled squares, but marked squares as well.

Under the Assign Square Color in the Options screen, you can choose either Fill Only, Mark Only, Fill and Mark, or Don’t Use.

ᎷᏋᎧᏇ_ᎷᏋᎧᏇ ⋅ The Longing now available for Switch ⋅ 4 minutes ago