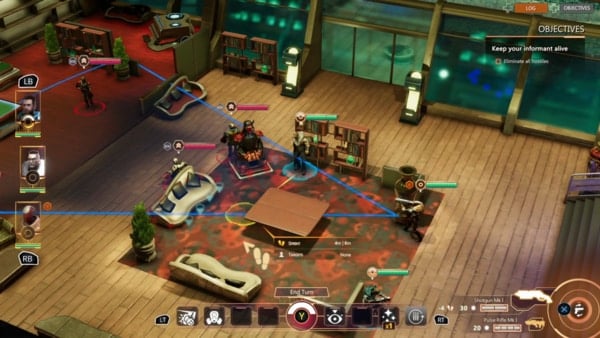 The console release includes the addition of voice-over dialogue and a new narrative-friendly gameplay mode.

In 2199, the terrorist group Tempest unleashed a series of coordinated strikes across the solar system, ending an era of uneasy peace for humanity in its newfound home among the stars. Framed for the attack, Captain Christopher Pietham and his elite squad of troopers set out on a journey across the galaxy to clear their names and save humanity from a genocidal conspiracy.

Maneuver soldiers in strategic turn-based combat peppered with intense action sequences across 24 battlefields teeming with destructible cover and environmental hazards. Form a team, recruiting companions with distinct abilities, beliefs, and allegiances. Gear them up with an armory of more than 30 weapons. Then gain favor with a variety of factions to unlock new perks and powerful skills to lead the unit and take the fight to Tempest in a myriad of ways.

Make decisions that carry weight on and off the battlefield. Element: Space’s ideological system tracks narrative choices and combat actions, impacting how Pietham is viewed by his allies and the world around them. Certain actions will attract recruitable characters to the cause, while others can trigger events and open entirely new branches of the story to explore.

The console version of Element: Space will be playable at PAX East 2020, which runs from February 27 to March 1 at the Boston Convention Center.