BitSummit THE 8th BIT set for September 2 to 3

Attendees limited to developers, publishers, media, and sponsors based in Japan. 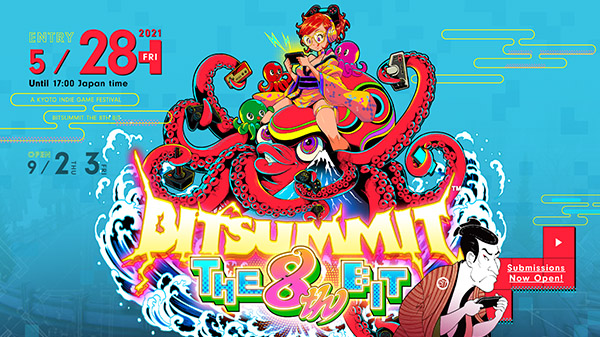 BitSummit THE 8th BIT will run from September 2 to 3 at the Kyoto International Exhibition Hall, Miyakomesse, organizer Japan Independent Games Aggregate announced. Submissions are now open through May 28 to developers interested in exhibiting their games at the show.

Due to the ongoing COVID-19 pandemic, attendees will be limited to developers, publishers, media, and sponsors based in Japan. Japan Independent Games Aggregate will continue to monitor the situation in Japan and follow all guidelines set by public health officials to make adjustments for safety.

As for developers not based in Japan and fans, BitSummit THE 8th BIT will have “a number of ways” to participate online, including remote booths for officially selected developers with live support from staff on the event floor; the BitSummit Discord channel and other social media channels; and an accompanying live stream with a focus on game reveals, Let’s Plays, and panels led by industry-leading talent on game development during the pandemic.

BitSummit THE 8th BIT will also organize business-to-business meeting systems for developers, publishers, and media in order to facilitate more opportunities for people trying to connect.

Additional information regarding guest speakers, musicians, and sponsors will be announced in the coming months.

Granblue Fantasy: Versus version 2.51 update now available Previous post
Nongunz: Doppelganger Edition launches May 5 for PS4, May 6 for Switch, and May 7 for Xbox One and PC Next post