Bubble Bobble 4 Friends: The Baron is Back coming to PC on March 25

Currently available on PlayStation 4 and Switch. 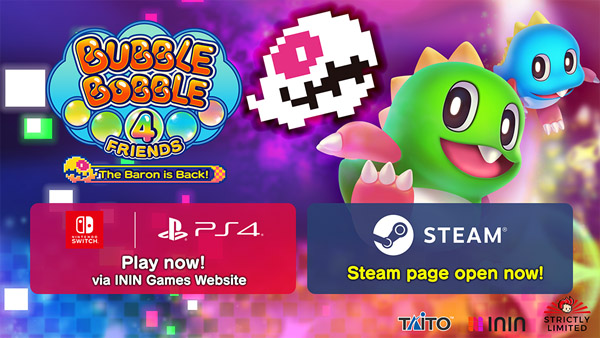 Taito will release Bubble Bobble 4 Friends: The Baron is Back for PC via Steam on March 25, Taito parent company Square Enix announced.

The Bubble Bobble series of games began in arcades in 1986, inviting players to control the bubble dragons, Bub and Bob, and complete the action-puzzle stages which comprised the game. Bubble Bobble 4 Friends is a brand new sequel in the series, featuring the classic bully bubbling and bursting action with new skills to use and 200 all-new stages to enjoy. Play alone or together with three other friends in local multiplayer. It even contains the original Bubble Bobble and online rankings so you can compete with the best in the world.

You can enjoy the game with up to four people in local multiplayer, and we’ve added compatibility for Steam controllers, PlayStation 4 controllers, and keyboard with customizable controls too. As the original Bubble Bobble requires two people playing to see the game’s true ending, two people can even share one keyboard!

Watch the PC announcement trailer and a video message below. View a new set of screenshots at the gallery.