Muv-Luv Unlimited: The Day After now available for Steam 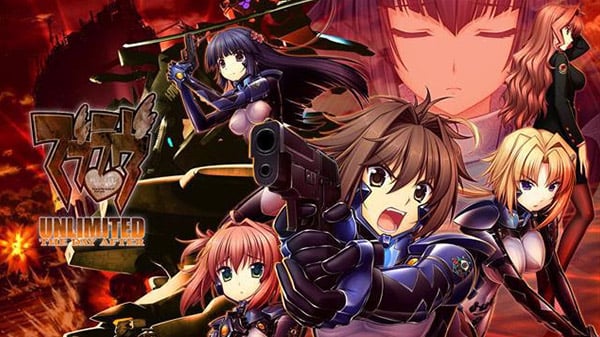 Here is an overview of each episode, via aNCHOR:

Picking up directly where Muv-Luv Unlimited left off, witness the aftermath of Alternative V, as the last remnants of humanity fight a desperate battle for survival on a barren and desolate Earth! Featuring a brand-new cast (with some returning fan-favorites thrown in for good measure!) and all-new challenges to face, this epic four-part saga is sure to please longtime fans and newcomers alike!

In a desperate attempt to exterminate the BETA, mankind has forsaken the Earth. Stranded onboard a TSF carrier in the South Pacific, a handful of survivors scramble to find a way back home to America. This is the beginning of The Day After…

The epic saga of The Day After continues! In the aftermath of Operation Babylon, only a few inhabitable places remain on Earth. Follow the Japanese survivors in Seattle as they struggle to rebuild their lives—and defend themselves from the BETA.

Muv-Luv Unlimited: The Day After continues! The Shogun has come to Seattle, and with her, an installation that might solve the ongoing food crisis. But tensions simmer beneath the surface, as an unseen enemy waits for its chance to strike.

The stakes grow higher in this latest episode of Muv-Luv Unlimited: The Day After! The shadow of nuclear annihilation looms over mankind, as France places the city of Seattle in the crosshairs. Can humanity overcome this crisis and unite to face the BETA?

Watch the Steam trailer for Muv-Luv Alternative: The Day After below. Visit the official website here.

Hadeshi. ⋅ Genshin Impact for PS5 launches April 28 alongside version 1.5 update ‘Beneath the Light of Jadeite’ ⋅ 4 minutes ago