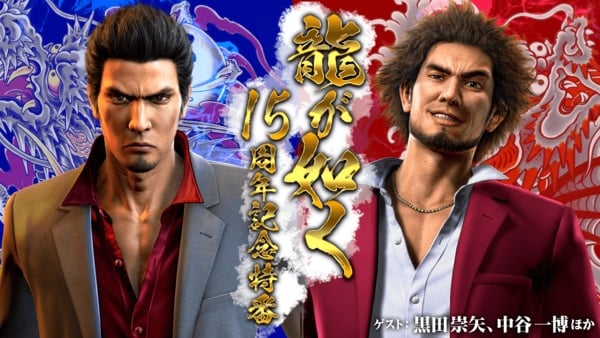 Sega will host a Yakuza series 15th anniversary special live stream on December 8 from 20:00 to 22:00 JST, the company announced. You will be able to watch it on YouTube.

Sega is seeking users to participate in the live stream in real-time surveys via Zoom. You can apply here until November 26 at 23:59 JST.

In addition to the 15th anniversary stream, Sega will host a Yakuza series 15th anniversary 151.5 hours PlayStation 4 main series let’s play live stream from December 2 at 13:00 JST to December 8 at 20:30 JST. You will be able to watch it on YouTube. During the broadcast, developers and related parties will attempt to clear the series from Yakuza: Kiwami to Yakuza 6: The Song of Life. At 20:00 JST each day, a special guest may also appear. Presenters include Toshihiro Nagoshi (Yakuza series general director), Daisuke Satou (Ryu Ga Gotoku Studio representative / producer), Masayoshi Yokoyama (Yakuza series chief producer), and other development staff.