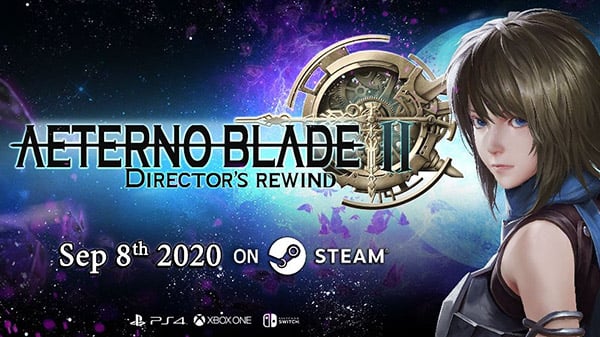 AeternoBlade II: Director’s Rewind and the original AeternoBlade will launch for PC via Steam on September 8, developer Corecell Technology announced.

The PlayStation 4, Xbox One, and Switch versions of AeternoBlade II, which are available now, will also receive a free “Director’s Rewind” update “soon.”

Here is an overview of the game, via Corecell Technology:

AeternoBlade II: Director’s Rewind challenges you to reclaim the power of time and defy the abyss in a fast-paced action / puzzle platformer environment. Rich on features you need to master combat, solve tricky puzzles, and have quick reflexes to succeed. Get ready for hours of mastering both martial- and time-manipulation arts to solve mind-bending puzzles and defeat merciless hordes of enemies.

Sega and Delightworks announce Sakura Kakumei: Hanasaku Otome-tachi for iOS, Android Previous post
The Signifier launches October 15 for PC, in early 2021 for PS4 and Xbox One Next post