Latest look at the upcoming remaster. 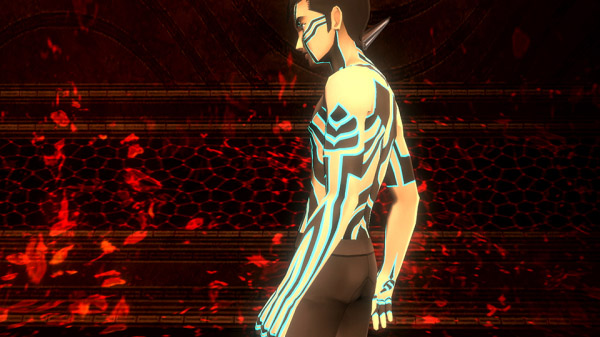 Here are some details, partly via the PlayStation 2 version’s manual and official website, and partly newly translated information:

A high school student is on his way to meet his friends so that they can visit their sick teacher at the Shinjuku Medical Center. But as he rides the subway, he falls asleep and has a strange dream. He dreams that the world is about to end…

He arrives at the hospital and, aside from his friends, finds it completely deserted. After searching the building, he finds a man who describes what he saw in his dream. Frightened, he then comes across a curious old woman with a child.

The young man finds his teacher, only to witness the destruction of Tokyo. This is the Conception, the ending of the world in preparation for its rebirth.

As the young man lies unconscious, the child reappears With an innocent whisper, the child gives him the key to survival—Magatama.

When he awakens, he finds himself reborn as a demon. He discovers that the entire world has changed The earth is wrapped in a mysterious light as if it has been turned inside-out. It is now the Vortex World. He sees souls of tho dead and demons who live off of what they call “Magatsuhi,” the element of life. Even though he has been imbued with amazing powers, he realizes that in order to survive, he must recruit demons to fight alongside him.

Why was the earth transformed? Why has he become a demon? To find the answers, he sets out on a long journey, unaware of what terrifying secret he is about to uncover…